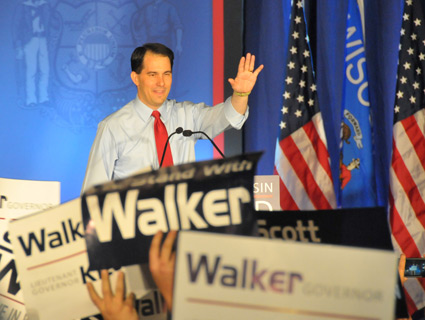 Make no mistake: Democrats and unions got their butts kicked in Wisconsin. So what went wrong? Here are three (UPDATE, 1:45 PM EST: I just added another one!) four reasons why the left fell far short in their effort to oust one of the most anti-union, hard-line conservative governors in America.

Walker crushed his Democratic opponent, Milwaukee Mayor Tom Barrett, in the political money wars. The governor raised $30.5 million while Barrett pulled in $3.9 million—a nearly 8-to-1 advantage in candidate fundraising. Walker banked on in- and out-of-state donors, including heavyweight GOP contributors such as Houston homebuilder Bob Perry and Amway heir Dick Devos. Walker was able to raise so much money because of a quirk in state law that lets candidates potentially facing a recall raise unlimited funds for their defense. (The normal limit for individual donors in $10,000.) Barrett did not get to raise unlimited funds in his recall campaign—which placed him at a great disadvantage.

All that money helped Walker pound Barrett in the ad wars. An analysis by Hotline On Call found that Walker and his GOP allies outspent Barrett and his backers 3-to-1 on TV ad buys in the three months before Tuesday’s recall. The dark-money-peddling Republican Governors Association itself spent $9.4 million to keep Walker in office.

Filing nearly one million signatures to trigger a recall election, Democrats and union leaders and members had their sights trained on the governor. The recall election’s Democratic primary forced them to take their eyes off the prize. A primary fight between Barrett and former Dane County executive Kathleen Falk splintered the labor movement. The major unions endorsed Falk early on, sometimes over the opposition of their own rank-and-file. Several other unions held out until late March, when Barrett entered the race, and then endorsed the mayor. This primary drama knocked the anti-Walker effort off course for weeks, if not a month, in a race where every single day counted. It divided a unified movement into Barrett supporters and Falk supporters.

Democrats and labor unions touted their massive get-out-the-vote operation, which was supposed to tip the scales in their favor. Turnout was way up in the elections, at 2.4 million, but the left failed to win over the types of people who elected Walker in 2010. As the Milwaukee Journal Sentinel notes, Walker’s Tuesday win is a mirror image of his 2010 victory—just with more voters. He won men and lost women; won independents and lost moderates; and won suburban and rural voters but not urban voters.

More notably, Walker won 38 percent of votes from union households—an increase of 1 percent from 2010. Remember, union members or their spouses didn’t know in 2010 that Walker planned to target them after the election with his anti-union “budget repair” bill curbing collective bargaining rights. Yet 16 months after Walker launched his attack on unions, just as many people in union households voted for him. The unions failed to rally their own ranks.

The War for Wisconsin began as a fight over labor rights, a fight begun by labor unions and their members. Not surprisingly, exit polls showed that 71 percent of union members voted for Barrett compared to 29 percent for Walker.

But voters in union households who weren’t union members themselves split almost evenly. As the Washington Post notes, Barrett won those voters 51 percent to 48 percent. That’s a disappointing number for Democrats and labor. If they wanted to recall Walker, unions needed massive support from the rank-and-file and their spouses. That didn’t happen Tuesday.*

Consolation Prize: Democrat John Lehman appears to have ousted sitting GOP State Sen. Van Wanggard in Wisconsin’s district 21. With 100 percent of precincts reporting, Lehman, a former state senator, led Wanggard by 779 votes, according to the Associated Press. Such a narrow margin of victory will likely result in a recount.

Lehman’s potential victory matters—sort of. It denies the GOP a sweep of all six of Tuesday’s elections, and shifts control of the state Senate to the Democrats. However, the senate’s legislative session is over.

Correction: The original version of this story incorrectly applied the percentages in this paragraph to all voters in union homes, and not just the non-union members of the households. The text has been corrected.