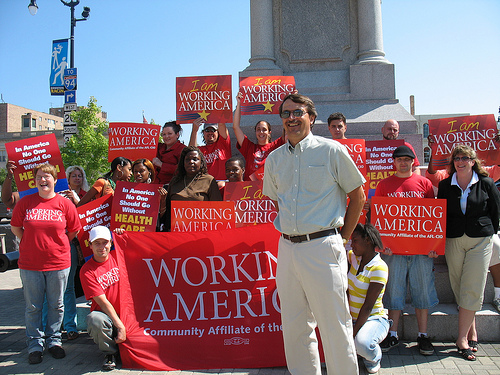 The race matters because a Lehman win would hand Democrats control of the state senate for the first time since Gov. Scott Walker took office in January 2011. It would also mean Democrats and labor unions avoided a clean sweep in Tuesday’s six recall elections in Wisconsin.

“Tonight, the citizens of Racine County voted for checks and balances in our state legislature,” Lehman said in a statement. “I look forward to working with my colleagues in the state senate.”

Wanggard has yet to concede. His campaign manager released a statement Wednesday morning that said: “We owe it to all of Senator Wanggaard’s supporters and the voters of Wisconsin to thoroughly examine the election and its results and act accordingly once we have all of the information.”

The Wanggard-Lehman recall battle was similar to the marquee race on Tuesday’s recall ticket, the Scott Walker-Tom Barrett election. Just as Walker and Barrett squared off for the first time in the 2010 gubernatorial election, Wanggard defeated Lehman in a 2010 state senate race. Now it appears that Lehman has got his revenge for that loss.

There could be a recount in the Wanggard-Lehman race with the final, unofficial result so close. In Wisconsin, if a race’s margin of victory is 0.5 percent or less, it triggers a taxpayer-funded recount. If it’s between 0.5 percent and 2 percent, a candidate can demand a recount at a discounted price.