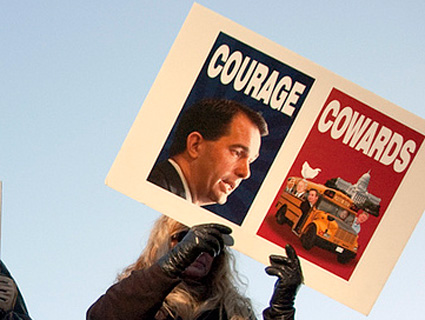 Starting last week, a shadowy political group with a generic-sounding name and a scant paper trail unleashed a TV ad campaign in Wisconsin to convince voters that Tuesday’s recall elections are “against the Wisconsin way.” Bankrolled by the Virginia-based Coalition for American Values (CAV), the ads urge support for Gov. Scott Walker and, instead of attacking his opponent, Milwaukee Mayor Tom Barrett, assail the very premise of the recall effort. Though dark-money funded attack ads have flooded the Wisconsin airwaves, targeting both candidates in recent months, Barrett supporters worry that CAV’s last-minute effort could affect turnout among crucial undecided voters.

Mike McCabe, director of the nonpartisan Wisconsin Democracy Campaign, which tracks money in state politics, says dark-money outfits like CAV poison elections in the Badger State. “The public is totally in the dark as to who is really supplying this money,” he says.

CAV has so far released two 30-second ads and a single one-minute spot. One media buyer says the group has purchased airtime for its anti-recall ads in each of the state’s seven media markets at an estimated cost of nearly $300,000. The ads depict various individuals who say they didn’t vote for Walker in the 2010 election, yet oppose the recall. “I didn’t vote for Scott Walker, but I’m definitely against the recall,” one man says. “There’s a right way, there’s a wrong way, and I think this is the wrong way,” says a woman in the same ad. “Recall isn’t the Wisconsin way,” the narrator says, ending with this message: “End the recall madness. Vote for Scott Walker June 5th.”

CAV describes itself as a “grassroots advocacy organization created by leaders from a wide array of issue interests.” It’s unclear who’s really behind the group—and it has seemingly taken measures to keep it that way. The local address CAV lists on disclosure forms appears to trace back to a Milwaukee UPS Store. Same goes for the Arlington, Virginia, address it provides on its bare-bones website.

State and federal records list Brent Downs as CAV’s treasurer, but an online search reveals nothing about who he is. (CAV did not respond to multiple phone and email messages for comment.) Federal Election Commission records list Illinois attorney James Skyles as CAV’s general counsel. Skyles’ online résumé says he formerly worked for the Franklin Center for Government and Public Integrity. The Virginia-based think tank is part of the State Policy Network, a national web of free-market outfits that promote anti-union, pro-privatization policies. Reached at his office, Skyles said CAV is “a very new organization” devoted to “social welfare and public education.” But he repeatedly declined to identify the people behind the group, citing attorney-client privilege. CAV’s Facebook page, created less than two weeks ago, includes a handful of links to recall-themed news stories, but no information about runs the group.

The FEC warned the group in May that it could face “civil money penalties” or “legal enforcement action” for its failure to file a disclosure report.

The Center for Responsive Politics’ website lists just one donor to CAV’s associated PAC: Rebekah Mercer of New York City, who gave $50,000 in November 2011. Mercer has given tens of thousands to conservative candidates such as Reps. Jeff Flake (R-Ariz.) and Steve King (R-Iowa) and groups including the Club for Growth.

A search of FEC records turns up just a handful of documents for CAV. The most recent is a May 3 letter (PDF) from the commission warning the group that it could face “civil money penalties” or “legal enforcement action” for its failure to file its April quarterly disclosure report. In late May, CAV registered with Wisconsin’s elections agency to make independent expenditures supporting Walker in the recall.

Along with its recall efforts, CAV operates a website called ProtectSandMining.com, which says it was created to dispel “a vast amount of misinformation” about the practice. Sand mining has boomed in northern Wisconsin as the use of “hydraulic fracturing,” or fracking, has grown. Fracking is the process by which a mix of chemicals, water, and sand are blasted into the ground to access natural gas reserves. CAV’s site touts the potential jobs created by sand mining in Wisconsin, while downplaying concerns about its sizable environmental impact. (Additionally, the group has also sought to raise money for Samuel “Joe the Plumber” Wurzelbacher’s Ohio congressional bid.)

CAV’s ad blitz is especially troubling to Democrats and labor officials who know that turnout could mean the difference between ousting Walker and any of the four Republican state senators facing recall on Tuesday. CAV’s anti-recall message, they say, could convince some voters to skip the elections altogether.

Michelle McGrorty, executive director of the left-leaning Greater Wisconsin Committee, says she’s angry that a dark-money group is dumping money into anti-recall ads and keeping its donors secret from the people of Wisconsin. “This is bad for Wisconsin and it’s bad for our democracy,” she says.