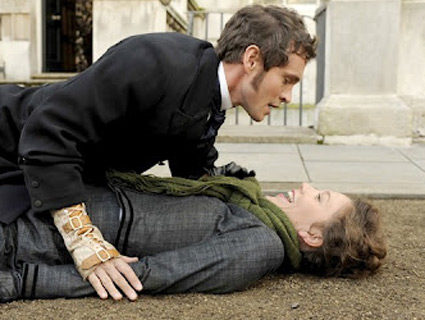 Allow me to be straight with you: Half of this movie is just watching physicians in 19th-century England getting rich old ladies off.

And what, you ask, did these Victorian doctors prescribe to calm their women patients? Why, a physician-administered volcanic orgasm, of course!

As interesting a plot as this may seem, it merely provides a backdrop to the film’s more conventional storyline: The opposites-attract style romance between Mortimer and Charlotte (a peppy and charismatic Maggie Gyllenhaal), one of Robert’s daughters. Charlotte is a headstrong feminist and tenacious working girl who specializes in things that pay significantly less than tickling ruling-class loins, like running a soup kitchen and espousing politically progressive dogma.

“You, ma’am, are a socialist,” Mortimer shyly accuses Charlotte, after she goes off on a rant about voting rights. “Why not?” Charlotte replies with brio. “Socialism is nothing more than people pulling together!” (If this movie has a shred of commercial success beyond the indie circuit, we’ll have to brace ourselves for yet more Fox News bedwetting over supposed pinko indoctrination by Hollywood.)

So there you have it: If you’re in the market for a leftist date movie centered around the genesis of this fella… 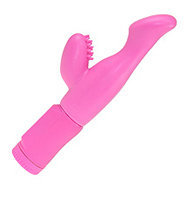 The Medical Center for Female Sexuality…then the offbeat Hysteria fits your demographic.

Mortimer’s unlikely rise to stardom (very loosely cribbed from the true story of one Dr. Joseph Mortimer Granville) is where this rom-com derives its charmingly tawdry com. It is at times unquestionably amusing to watch these people react to the feminine climax as if they’ve just discovered the Ark of the Covenant. In one scene, the three men strap on protective goggles before using their newly patented electro-pleasure-snake to literally make a fat lady sing.

But the comic novelty can only be stretched so wide, and the parade of giddy orgasm gags get old—maddening, even—as the film staggers to its final chapter. The irony is that the comedy itself becomes, yes, rather masturbatory.

Director Tanya Wexler and screenwriting duo Jonah Lisa and Stephen Dyer manage to bring a few wafers of wit and edginess to the table; but the resulting chuckles are rendered forgettable by the larger and longer slabs of half-assed humor. The chemistry between the hugely talented Gyllenhaal and Dancy is palpable, but the courtship and repartee don’t rise above period-piece formula. And though Hysteria‘s intentions and morals are all well and good (women’s liberation, feel-good politics, charity), its civics often veer onto preachy terrain—particularly during a courtroom scene when Charlotte rattles off a laundry list of platitudes while on trial for assaulting some butt-headed constable.

Good vibrations? Sadly, not quite.

Hysteria gets a wider release on Friday, May 25. The film is rated R for sexual content. Click here for local showtimes and tickets.