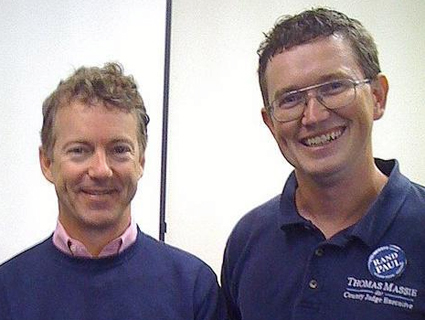 As it became obvious on Tuesday evening that Thomas Massie was going to win the GOP primary in Kentucky’s 4th congressional district, Trey Grayson hopped on Twitter to explain just why this story sounded so familiar: “Have to admit that I chuckled when someone called Massie’s performance so far tonight a #Randslide. Pretty apt description. I should know!”

He should. Two years ago, the only thing standing between Grayson, the GOP’s handpicked replacement for retiring Sen. Jim Bunning, and the Republican Senate nomination was a Bowling Green optometrist with no political experience. Grayson lost to Rand Paul by twenty points. On Tuesday, in the 4th district, it happened again. State Sen. Alecia Webb-Edgington had the support of retiring Rep. Geoff Davis and Bunning, who held the seat previously. County executive Thomas Massie, with Rand Paul’s backing, won by 16 points. Randslide indeed.

(More evidence of Paul’s coattails: Former spokesman Chris Hightower, last seen resigning from Paul’s senate campaign after being outed as a Satanic death-metal drummer, won the GOP primary for a seat in the Kentucky state house on Tuesday.)

Massie had help, though. Liberty for All, a Texas-based super-PAC founded by John Ramsey, a 21-year-old Ron Paul-loving college kid (you can read my profile of Ramsey here) paid for a $550,000 advertising barrage over the final 10 days of the campaign. Funded, at least for now, with money Ramsey inherited from his late grandfather, Liberty for All wants to provide a party framework for “Freedom candidates”—that is, provide the kind of institutional support and training for Paul-ish candidates that establishment pols already get from party organs. Preston Bates, the group’s executive director, estimated that they’d end up spending $700,000 on the Massie race if you factor in direct mail and man hours. That’s a lot, especially when you consider that Webb-Edgington, the second-place finisher, had raised just $200,000 by May 2.

Whether or not Ramsey, Bates, et al. can take their project to scale remains to be seen, but the race offers a glimpse of the future landscape of campaign finance. As Grayson, now director of the Harvard Institute of Politics, put it: “Expect to see more Super PACs getting involved in Congressional & other ‘smaller’ races where six figure donations can tilt an election.”