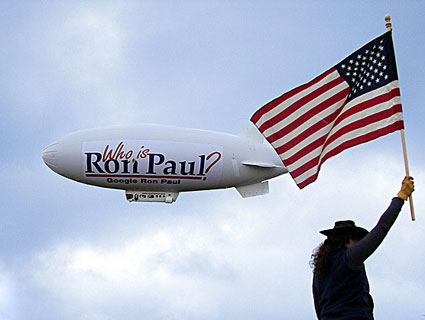 In late March, one week after the last of the television networks’ embedded reporters packed up his gear and left the Ron Paul campaign, Alexis Campestre, a ringleader of the Ron Paul Roadies, decided to call it quits, too.

The Roadies, so named because they had been touring primary and caucus states in a van since January, were running out of money, and so the group took down the website asking for donations and Campestre wandered back to his hometown of Lake Jackson, Texas.

Then he got right back to work. When I caught Campestre on the phone on Thursday, he was busy drumming up support for Paul ahead of the Brazoria County GOP convention later this month. Then it’s on to the state’s May primary and, hopefully, a spot as a delegate at the GOP convention in Tampa with the rest of the Roadies (no word on whether they’ll carpool). “This is a global revolution, if you think about it, with the Arab Spring and really everything that’s going on around the globe,” Campestre says.

For the Texas congressman and his band of supporters, that’s a serious question. Mitt Romney has begun to seal up the Republican presidential nomination, so Rick Santorum has taken to bowling and drinking beer, while Newt Gingrich has laid off much of his staff (but not the staffer he pays to dress up like a time-traveling elephant). But Ron Paul, hemorrhaging money, losing super-PAC support, last in the delegate count (more on that in a second), and generally finding his electoral prospects DOA, has only doubled-down. “I’m trying to save the Republican Party from themselves,” he told CBS’ Bob Schieffer earlier this month.

Why do so many members of the military love Ron Paul?

In part that’s because Paul’s campaign, relative to that of every other candidate, including the president’s, is a seriously nebulous affair. There are roughly a dozen Ron Paul-centric super-PACs in various stages of activity. There are unaffiliated sites, like the Daily Paul, dedicated entirely to the congressman’s message; slick video-sharing sites; and merchandise emporia, none of which have any formal connection whatsoever to the campaign. Shutting down that kind of operation isn’t as simple as flicking a switch.

Paul’s most ardent supporters still believe he has a shot at winning the nomination at a brokered convention in Tampa. Media reports notwithstanding, Campestre and others insist that Paul is actually second in the delegate count, well ahead of Santorum and Gingrich, and within striking distance of Romney. (Here’s one supporter explaining how Paul actually has 380 delegates, 172 more than Santorum and just 123 fewer than Romney). That’s not supported by results out of places like North Dakota, where Romney cleaned up in the delegate tally despite a third-place finish at the caucus. But to Paul die-hards, North Dakota is an exception that proves the rule—Romney’s big win, via perceived establishment strong-arming, is proof that Paul is a real threat to win.

“I mean, it’s all projections essentially, but I personally, as a volunteer who’s made closing in on 50,000 phone calls to supporters and potential delegates…have contacted thousands of delegates that are going on to their county conventions and state conventions and the national convention,” Campestre says.

Paul, who never endorsed John McCain in 2008, wasn’t invited to speak at the Republican convention that year. Instead, he held a counter-convention in Minneapolis, joined by luminaries like former Minnesota Gov. Jesse Ventura and former Ron Paul Survival Report editor Lew Rockwell. Paul’s relationship with the party has seemed less strained this time around—among other things, he wasn’t banned from any debates—but he still hasn’t indicated whether he’ll even endorse the eventual nominee.

Jun Dam doesn’t want him to. Dam is principal of Grassroots for Liberty, a small-donor super-PAC dedicated to boosting Paul’s 2012 campaign. Unlike Endorse Liberty, Dam’s group has no intention of simply shifting its resources down the ballot. They have much bigger plans. Grassroots for Liberty would rather Paul continue running on a third-party ticket, such as the Libertarian Party of Constitution Party—or as an independent if absolutely necessary. But that means Paul has to act fast.

“The one thing I’m concerned about for Ron Paul is he seems like he doesn’t rule out a third-party run but he wants to wait until after the convention,” Dam says. “But the convention is in late August, so by that time ballot access is an issue. How is he gonna get on the ballot?”

“Whenever I talk to Ron, I always regret that I don’t talk to him about more substantial things.”

Grassroots currently has a petition up on its site calling for Paul to continue pushing for Republican delegates while simultaneously making overtures to third parties and and the dark-money-funded ballot-access initiative Americans Elect. Worst-case scenario, Dam says, Paul could recruit a placeholder candidate who could step down and allow him to be the nominee. That way, if things don’t turn out well in Tampa, he’ll at least have a contingency plan. By that same token, the very existence of a contingency plan would give Paul more power at the negotiating table in the event of a brokered convention.

Specifically, per Dam’s plan, Paul would need to make some sort of decision by April 18—the start of the Constitution Party convention—or May 2, when the Libertarian Party convenes in Las Vegas. In his view, Romney simply can’t win, so any talk of Paul playing spoiler would be moot.

Dam’s not worried about an independent or third-party Paul campaign interfering with Paul’s son Rand’s chances going forward, either. “If Ron Paul runs on a third party and Obama is still re-elected, the economy will most likely deteriorate and all those who missed an opportunity to vote for Ron Paul in 2012, but who have an understanding of his powerful message, will naturally vote for Rand Paul in 2016,” explains an FAQ at Grassroots for Liberty’s website.

“I think the Ron Paul campaign symbolically is the best platform to spread the message—especially if he runs all the way into the general election,” Dam says.

Others, though, are less bullish on Paul’s prospects, and see November as just another step in a long campaign to nudge government closer to their ideal. In March, Endorse Liberty, the biggest of the Ron Paul super-PACs (it has funding from PayPal founder Peter Thiel), indicated to Politico that it was “re-assessing” its strategy going forward. Endorse Liberty has all but stopped running ads and is now looking more closely at down-ballot House and Senate candidates. That route has promise: In 2010, Paul allies—one of them a relative—scored two big victories with the election of Sen. Rand Paul (R-Ky.) and Rep. Justin Amash (R-Mich.).

“Whenever I talk to Ron, I always regret that I don’t talk to him about more substantial things,” says John Dennis, a longtime Paul backer from San Francisco who is the Republican nominee to challenge Minority Leader Nancy Pelosi this fall. He’s confident that Paul won’t attempt to buck the party this fall. “My impression has been over the years is that we’re trying to build a base within the Republican Party, and all the good work that’s been done toward that end, and all the good will that’s been built up within the Republican Party would get destroyed the moment that he did that.”

Despite all Paul has done to advance Dennis’ political career and the End-the-Fed, End-the-Wars views they share, the San Francisco GOPer acknowledges there’s a danger in placing too much of a premium on the success of one candidate. As Dennis puts it: “This can’t just be a one-person thing. Then it just turns into a cult.”