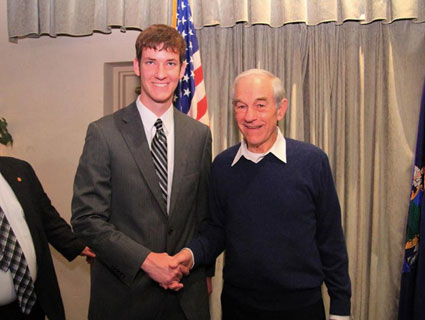 John Ramsey is not the only college student with his own super-PAC. Since last summer, dozens of projects have sprung up on campuses across the country, most of them with names—Americans for a Better Tomorrow, Yesterday; Penn Staters for a Better Tomorrow, Tomorrow—that pay homage to their inspiration, Comedy Central’s Stephen Colbert.

But Ramsey, a 21-year-old economics major at Stephen F. Austin State University in Nacogdoches, Texas, is almost certainly the only college student in the country to build his own super-PAC from scratch, seed it with $890,000 he inherited from his grandfather, and use it to tip the scales of an otherwise anonymous Republican primary 900 miles away from his home.

Since last Thursday, Ramsey’s outfit, Liberty for All, has been running television ads in Kentucky’s 4th Congressional District in support of Thomas Massie, a Ron Paul-endorsed candidate who’s running to fill the seat of retiring GOP Rep. Geoff Davis. With one week to go until the election, Massie leads in the polls and, in a deep-red district, stands a better-than-average chance at winning in November, too. But Ramsey isn’t leaving anything to chance. His PAC has poured $542,600—almost all of it from his own pocket—into campaign ads. And unlike most outside groups, Liberty for All is putting hundreds of thousands of dollars into a ground game, too—splurging on direct mail and organizing get-out-the-vote and phone-banking operations.

It’s no small accomplishment for someone who’s still nine credit hours away from his bachelor’s degree.

Ramsey incorporated Liberty for All in March, along with Preston Bates, a onetime Democratic state committeeman from Louisville who, like Ramsey, had decided to put off graduation indefinitely to focus on politics. The two met while working on Ron Paul’s presidential campaign in Iowa and saw an opportunity. There are dozens of political action committees across the country dedicated to supporting Ron Paul—Ramsey gave $550 to one of them, Revolution PAC, last fall—but their emphasis on grassroots organizing meant that they were inherently myopic. The idea for Liberty for All, as they envisioned it, was to put together an organization that could think big.

“We’re the only freedom organization that is focused on winning elections, plural,” Bates says. “They were focused on winning one election and that’s Ron Paul’s campaign. Our [goal] is to become an institution.” They’re hoping to create nonprofit spinoffs devoted to voter education and candidate development. That would give the “Liberty movement”—the term of choice for Paul’s brand of libertarian-infused conservatism—the kind of infrastructure it currently lacks. “I don’t know of frankly any super-PAC that’s doing that,” Bates says. “I would call us more like a party, frankly.” He points to groups like the Democratic National Committee and National Republican Congressional Committee as models.

“I don’t know of frankly any super-PAC that’s doing that,” Bates says. “I would call us more like a party, frankly.”

The other major difference between Liberty for All and various other Paul-inspired PACs, though, is that Liberty for All has money. When Ramsey’s grandfather passed away in 2010, John and his two siblings became millionaires overnight, inheriting holdings in real estate, timber, natural gas and other industries in separate accounts. Ramsey won’t say how much he has left in the bank, but he’ll open up his checkbook again if necessary.

“I think John’s position is to develop the PAC and to spend what it takes to get the PAC professionally managed and off the ground,” Bates says. “We don’t feel like we’re even comparable to other maniacal Crossroads GPS-style fear-and-smear super-PACs,” Bates says, noting that the group is placing an emphasis on small donors going forward. The goal is to be self-reliant by the summer and ultimately raise $10 million.

But first, there was the matter of finding a race where Bates and Ramsey could pursue what they call their “humanitarian” political rescue mission. Through Bates’ Kentucky activist network, they settled on Massie, an MIT-trained engineer turned anti-tax activist running in a state where Rand Paul, Ron’s son, cruised to victory in an open-seat Senate race two years ago. Massie’s race in many respects parallels Rand Paul’s 2010 campaign, pitting the Republican establishment against the younger, more tech-savvy Liberty crew. His most serious rival, state Sen. Alecia Webb-Edgington, has picked up endorsements from the retiring Rep. Davis and ex-Sen. Jim Bunning, another former 4th District congressman. The Susan B. Anthony List, the conservative answer to EMILY’s List, is backing her with a small ad buy.

For the moment, Liberty for All’s main battleground is Kentucky, where it has 11 paid staffers. But that stands to change. In Texas, Liberty for All has four local chapters and nine full-time employees devoted to supporting Ron Paul, working phone banks, and training delegates ahead of the state’s May 29th Republican primary. In light of Paul’s decision to stop spending money on upcoming primary contests, the group will be the closest thing the congressman has to an organized get-out-the-vote operation. Ramsey says he’s more than happy to pick up the slack.

“We’re on the frontier of freedom; we’re defending the American way of life,” he says. “We want to take the front lines, we want to be the front-line PAC that takes the weight of the freedom movement on our shoulder.”

The group is also going after Lamar Smith, the Texas Republican who’s become a pariah among internet activists for his sponsorship of the Stop Online Piracy Act, which they fear will effectively censor the web. Along with Test PAC (the first political action committee of, for, and by the Reddit community), Liberty for All has joined a coalition of PACs and super-PACs which have pledged to take down Smith.

Massie’s opponents have responded by shaming Liberty for All as little more than the impulse buy of a wet-behind-the-ears carpetbagger. “You may have heard about this college student from Texas that’s shown up here and is trying to buy this election by spending hundreds of thousands of dollars of his own money to advance his libertarian ideology and score a win for the Ron Paul movement,” Webb-Edgington told a GOP gathering in Kenton County last week. “It’s a shame that this young man’s gonna waste so much of his family’s hard-earned money. Because here in Kentucky we’re gonna stand united as Kentuckians and we’re gonna send him back to Texas empty-handed.”

As for Massie, he told the moderator at a debate on Monday that he’s never met John Ramsey. But, he added, “I think he’ll probably be getting a Christmas card from me this year.”