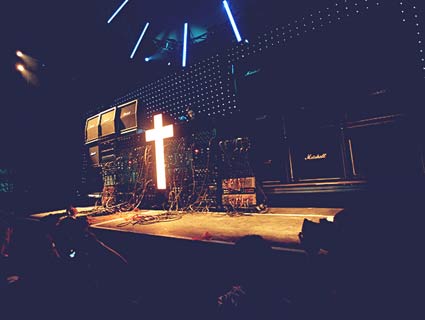 The opening act had hardly vacated the stage when the T-shirts in the lobby began selling out. Excited chatter filled the halls of Oakland’s Fox Theater with a static noise as neon-and-Chuck-Taylor-clad fans flocked to the merch stand, leaning over the table waving dollar bills, wanting so badly to bear the cross logo of the headlining act, Justice.

Lately, the dynamic French electronica duo, which consists of Gaspard Augé and Xavier de Rosnay, has become synonymous with the new age of electronica, wherein playful and infectious dance-disco beats are to be taken in with the sobriety and attitude of heavy metal. “They go straight for the jugular,” Rolling Stone wrote of the group.

Justice first splashed onto the Parisian electronic scene in 2003 with a remix of Simian’s “We Are Your Friends” and since risen to fame, mixing for bigwigs like Britney Spears, N.E.R.D., Fatboy Slim, and Franz Ferdinand. The pair’s first full-length album, 2008’s Cross, drew accolades from within the genre and without. The album’s biggest hit, “D.A.N.C.E.“—a disco track overflowing with pop references—is still ubiquitous, and its colorful video—which combines live action with animation—earned nominations at the Grammys and MTV Video Music Awards. For electronica fans, Justice’s success represents something bigger: the mainstreaming of what was once considered a niche club genre.

“Daft Punk was the first to merge guitar sounds with electronica and they sort of follow in that path, which is fun to watch,” one Justice fan dressed ironically in an air traffic controller vest told me moments before the show. “They also have amazing showmanship.”

From the depths of the pit, it was hard to tell whether we were at a concert or the scene of a Christian revival.

Justice was touring their sophomore album, Audio, Video, Disco., appearing in Oakland before an unlikely mix of rock and electronica fans—young and old, die-hard or simply curious. The anticipation swelled right up to the  moment the pair appeared at center stage behind their altar-like DJ booth (note the large fluorescent cross) wedged between walls of Marshall stacks. In greeting, Augé and de Rosnay looked into the crowd and raised their left hands, standing still as a sample of Hendrix’s “Star Spangled Banner” burst forth from the speakers. The crowd roared.

With that, Justice launched into a 90-minute set, starting with the hyperenergetic “Genesis.” From the depths of the pit, it was hard to tell whether we were at a concert or the scene of a Christian revival. (Indeed, the duo is coy about their intentions vis-à-vis religion.) Exactly what Augé and de Rosnay’s were doing up there wasn’t visible—the towering set engulfed their comparatively diminutive frames. But the crowd bought into it, pounding their palms against an invisible wall, without a hint of skepticism. Occasionally, when the steady beats and synthesized power chords grew faster, louder, Auge simply raised his pointer finger in the air, signaling the coming of a new track, or a big climax, and the crowd flailed more wildly, like participants at a collective exorcism.

“It’s like a dream come true to see this in such a small environment, and be up close to Justice, like, this is like the god of electronic music,” said a worshipful fan named Spencer.

While that may sound pathetically over the top, Justice makes drama impossible to escape. There’s the whole Christian thing with the glowing cross and Bible-themed track titles like “Waters of Nazareth” and “Let There Be Light,” the haunting organ sounds and chorales, the way de Rosnay’s cigarettes perch delicately between his lips as his hands go to work. “Justice have carved out an unmistakable sonic signature of discombobulated vocals, rattling, onerous dance beats and brutally distorted melodies produced by synthesizers that sound as though they were martyred just to emit one last growling roar for Justice’s cause,” a blogger wrote of Cross in 2007. The visual drama is magnified by the complete silence of the DJs—who uttered not a word to the crowd the whole time. Still, their sound and presence is tough to deny when you experience them live. “I have never been to a techno concert; I’m a rock concert girl” one newcomer told me. “But I like any kind of music that can imitate my heartbeat.”

Here’s “Civiliation,” from the latest album: