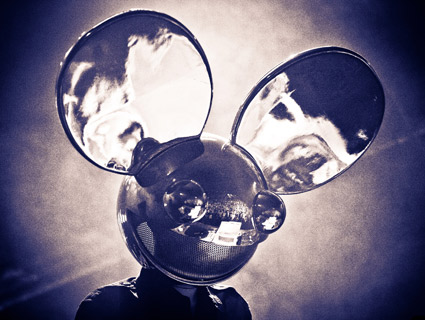 When electronic music producer and performer deadmau5 (pronounced “dead mouse”), a.k.a. Joel Zimmerman, does a show—as he did at the Outside Lands music festival in San Francisco on August 14—his fans manage to pack it. This time, they spread across the outdoor field in front of the Twin Peaks stage, dancing, screaming, and gazing in awe at his elevated, flashing stage cube as Zimmerman bobbed his giant mouse head to the beats he created. With the exception of the one dude who shouted, “You guys are crazy; Arcade Fire is on!” as he shoved past me in the stacked crowd, the fans didn’t care that this year’s Album of the Year Grammy winner was playing on the other side of the park.

Deadmau5 is ranked No. 4 on DJ Mag‘s list of best DJs in the world, but unlike No. 1, Armin Van Buuren, or No. 2, David Guetta, there is something different about the way fans interact with him and his music. Most DJs stand on a podium, outshone by the brilliant light shows flashing across their stages. But with his lit-up mouse head pulsing to the beat, and sometimes illuminating in a giant LED smile, deadmau5 is the centerpiece of his own light shows, including a brand new one developed for the three-month Meowington’s Hax tour he launched this summer at Lollapalooza in Chicago. Deadmau5 is also unique because he doesn’t consider himself a DJ—to quote his publicist, he is “an electronic music producer and performer [who] performs live all his own music—the way a drummer drums or a guitarist plays guitar.”

As I’d seen when deadmau5 played Coachella in 2010, many kids in the crowd at Outside Lands were wearing tattoos of his mouse symbol on their bodies, glow sticks fashioned into mouse ears on their heads, and their own homemade versions of his mouse head. As they danced to his hits, I kept hearing shouts like, “Deadmau5 is the shit!”

Which is funny, because deadmau5 seems to agree. As I experienced firsthand during a difficult interview with him a few hours before his show, he has a rep within the electronic dance music scene for being a little rude, to put it politely. (Just Google “deadmau5 is a” and see what autocomplete suggests.) “I just can’t believe there’s not many interesting things to talk about in the world,” was his reply to my first question, setting the tone of sarcasm and impatience that marked the rest of our brief chat. On his Twitter feed that day, when he wasn’t tweeting about his excitement about being at Outside Lands or making a few of his almost 500,000 followers gleeful when he mentioned them individually, his tweets were about how much interviews irk him. “Would anyone give a shit if I stopped doing interviews? God some of these are really really really?” he tweeted. 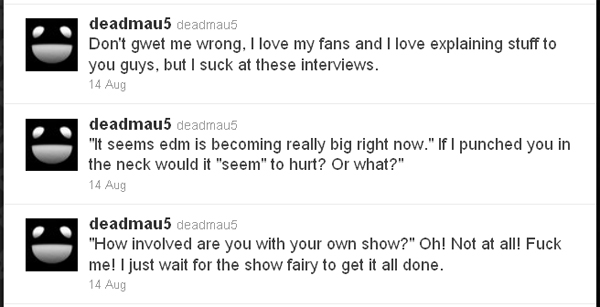 A selection of deadmau5’s thoughts on interviews.

But the same stream shows that deadmau5 appreciates his fans. It’s full of shout-outs to people, mentions of cool things he finds in their hometowns, and enthusiasm for the music. During our conversation, the rare moments when he genuinely engaged with my questions were when he talked about his fans. “I’m glad that my image is a conduit for creativity and people can have a mouse their way…that’s a fun thing that I take a lot of enjoyment and pride out of,” he said.

He also got angry—in a good way—when explaining why making Sofi, the vocalist on tracks like “Sofi Needs a Ladder” and “One Trick Pony,” a part of his live shows is something he owes his fans. “Sofi’s probably pretty much the only human element of the whole fucking show,” he said. “It’s something that’s just been really detached from the whole electronic music scene…If the artists are making fucking millions of dollars now, put on a goddamn show then, you know what I mean? I’ll fucking shoot myself in the face if I got ticket prices up in the hundreds and I’m sitting there with two turntables, playing other people’s fucking music…That’s just highway robbery; it ain’t right. So if kids want a show, give them a show.”

A few hours later, deadmau5 delivered on his promise. “I’ve seen him a few times, but this is my first time seeing his new visual light show,” a fan named Wolf told me. “He’s taken it to a whole new level. At this point, it’s deadmau5 and Daft Punk up there.” When Sofi came on stage and riled up the audience before launching into the vocals of “One Trick Pony,” the already wired crowd went wild. “He’s taking techno in a new direction—now you’ve got machines and the beauty of the human voice,” said a fan named Brent before joining a dance circle.

It says something about how enjoyable deadmau5’s music is that hours after that interview, as I stood packed into a crowd pulsing with so much enthusiasm that I couldn’t even feel the chilly San Francisco fog, I couldn’t help but dance right along with the rest. Deadmau5 is neither the cuddliest nor friendliest mouse that popular culture has known. But he knows how to make kids tear up the dance floor—or field, in this case. Deadmau5 plays music “’cause I enjoy it,” he said. “And I enjoy when other people enjoy it, which makes this big feedback of enjoyment.”

I’ll dance to that.