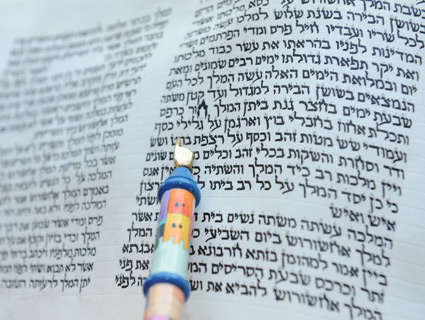 The following will sound a lot like a scene from Kung Fu Panda. It happened during the high-profile meeting between President Obama and Israeli Prime Minister Benjamin Netanyahu at the White House on Monday.

Bloomberg’s Jonathan Ferziger has the story:

Israeli Prime Minister Benjamin Netanyahu gave President Barack Obama a Purim Megillah scroll, which tells the story of how Jews prevailed over a plot to kill them in ancient Persia, which is present-day Iran.

In case you’re not familiar with the details of said Hebrew scroll: The Megillah, commonly known as the Book of Esther, is the part of the Hebrew Bible that tells the story of how a hard-partying Persian king was convinced by an evil adviser that it’d be fun to decimate the Jewish minority population in his dominion. He declares a government holiday in the month of Adar during which his subjects are given carte blanche to murder Jews and steal their property. Long-story-short, the Jews do a fantastic job of defending themselves against the state-sponsored onslaught, and then proceed to commit a hugely successful counter-slaughter of the Persians. (This bit of Biblical spin has long since found a home in the annals of fascist and far-right propaganda.)

Flash forward a couple dozen centuries, and the Jews now have something of a home-plate advantage over Persian foes: They are the regional superpower. They have backing of the only global superpower. The track record of the Israeli military—and special ops forces—has achieved a Hollywood–level of renown. Oh, and one other thing: They have nuclear bombs.