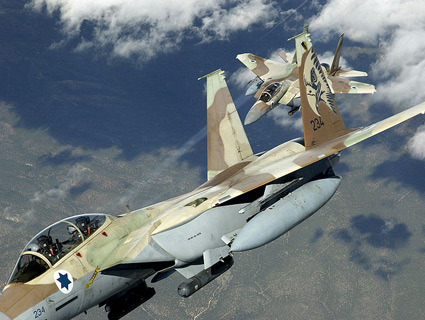 If Israeli leaders end up greenlighting a preemptive strike on Iran’s nuclear installations, there’s a decent chance American officials would be kept in the dark, a US intelligence official tells the AP. According to the source, Israeli officials said during private high-profile meetings that they would likely refrain from warning the Americans in order to “decrease the likelihood that the U.S. would be held responsible for failing to stop Israel’s potential attack”:

Israeli Prime Minister Benjamin Netanyahu and Defense Minister Ehud Barak delivered the message to a series of top-level U.S. visitors…including the chairman of the Joint Chiefs of Staff, the White House national security adviser and the director of national intelligence, and top U.S. lawmakers, all trying to close the trust gap between Israel and the U.S. over how to deal with Iran’s nuclear ambitions. Netanyahu delivered the same message to all the Americans who have traveled to Israel for talks, the U.S. official said.

[T]he apparent decision to keep the U.S. in the dark also stems from Israel’s frustration with the White House. After a visit by National Security Adviser Tom Donilon in particular, they became convinced the Americans would neither take military action, nor go along with unilateral action by Israel against Iran. The Israelis concluded they would have to conduct a strike unilaterally — a point they are likely to hammer home in a series of meetings over the next two weeks in Washington, the official said…The behind-the-scenes warning belies the publicly united front the two sides have attempted to craft with the shuttle diplomacy to each other’s capitals.

This is hardly the first time Israeli officials have indicated that an air strike on Iranian nuclear facilities might be carried out without notifying Washington. This latest “behind-the-scenes warning” could be little more than the standard diplomatic posturing and leverage; nevertheless, the uneasy narrative of plausible deniability is already being established. But, as the AP story notes, American officials are getting a bit creative about keeping themselves in the loop:

U.S. intelligence and special operations officials have tried to keep a dialogue going with Israel, despite the high-level impasse, sharing with them options such as allowing Israel to use U.S. bases in the region from which to launch such a strike, as a way to make sure the Israelis give the Americans a heads-up, according to the U.S. official, and a former U.S. official with knowledge of the communications.