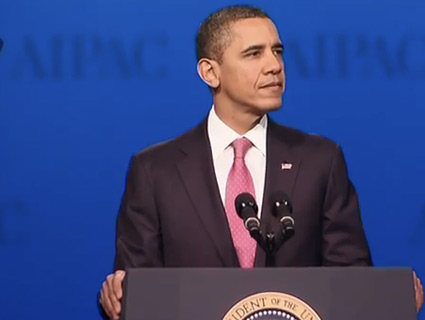 President Barack Obama at the 2012 AIPAC policy conference.Screenshot: <a href="http://www.youtube.com/watch?v=A0rFbP6KvxY">YouTube</a>

On Sunday, President Obama delivered his address to the American Israel Public Affairs Committee‘s annual policy conference in Washington, DC. Though he condemned the recent “loose talk of war,” Obama used the 34-minute speech as an opportunity to talk tough on Iran and to reject containment policy:

I do not have a policy of containment; I have a policy to prevent Iran from obtaining a nuclear weapon. And as I’ve made clear time and again during the course of my presidency, I will not hesitate to use force when it is necessary to defend the United States and its interests… And I know that Israeli leaders also know all too well the costs and consequences of war, even as they recognize their obligation to defend their country.

The president gave the much anticipated speech one day before his high-profile meeting with Israeli Prime Minister Benjamin Netanyahu—a meeting during which the Israeli leader is expected to further pressure the White House on upping the war rhetoric. During the speech, Obama did not specify what lines the Iranian government would have to cross to provoke an American military operation. (Click here for a complete transcript.)

The audience reception was warm, if not hugely enthusiastic. In Ottawa, Netanyahu issued the standard diplomatic response: “I appreciated that he made clear that when it comes to a nuclear-armed Iran containment is not an option,” he said. “I very much appreciated the fact that he said Israel has the right to defend itself by itself against any threat.”

The Republican presidential candidates were—as expected—not quite as generous. On Sunday, Rick Santorum (who pushes something of an End Times theory regarding a nuclear Iran) slammed Obama for the “loose talk of war” comment: “Loose talk of Republicans? The best thing that could happen in the world [oil] markets is an Iran without a nuclear weapon and a new Iranian regime, neither of which [Obama] is doing very much about to make happen.”

While the president was in the middle of delivering the keynote address at AIPAC, Newt Gingrich was on CNN invoking (yet again) genocide committed under Nazism: “We’re being played for fools,” Gingrich said on State of the Union on Sunday morning. “Israel is such a small country; it is so compact that two or three nuclear weapons would be equivalent to a second Holocaust.”

Ron Paul reiterated his noninterventionist position, criticizing both the president’s policy and his fellow candidates’ hawkishness. On Sunday morning, Paul said that it “doesn’t make any sense to bomb a country that is no threat to anybody just because they might get a weapon…I’d try to calm it down a little bit, but I don’t think [the United States] should tell Israel what they should and shouldn’t do.”

Front-runner Mitt Romney repeated his line about how “if Barack Obama is reelected, Iran will have a nuclear weapon and the world will change.” (Romney, Rick Santorum, and Newt Gingrich are scheduled to deliver remarks to the conference via satellite on Tuesday.) During a pancake-breakfast campaign stop in Atlanta on Sunday, Romney accused President Obama of failing to impose “crippling sanctions against Iran” (umm, not true), and said that “he’s also failed to communicate that military options are on the table and in fact in our hand, and that it’s unacceptable to America for Iran to have a nuclear weapon.” Which is all well and good, except for the fact that the president publicly addressed both of those points earlier that day.