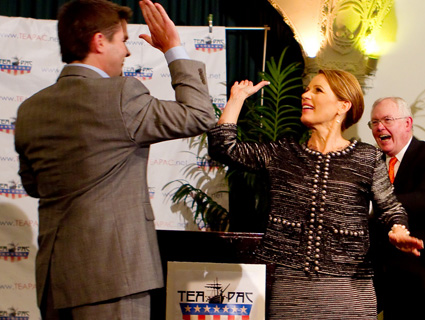 When Michele Bachmann was riding high, her campaign had a certain Hollywood feel. Hundreds of supporters packed into a steamy, smelly revival tent in Ames to hear her and country superstar Randy Travis before the Iowa Straw Poll. She kept a county fundraiser in Waterloo waiting until the lights at the Electric Park Ballroom hall had been set to her preference, and everything was just so, before bounding onto the stage—to Elvis, her favorite. The Bachmann campaign played up her celebrity appeal, the idea that you weren’t showing up to see just another presidential candidate. At her campaign kickoff event in Iowa, I met a family who had driven five hours from St. Cloud, Minnesota, in matching t-shirts emblazoned with “Michele Bachmann, Super Hero” on the front. Has anyone ever bedazzled anything for Rick Santorum?

Things are different now, in the final days before the Iowa caucuses. The media gaggle that once traipsed after Bachmann has thinned out. She no longer ends speeches by inviting supporters to stick around for souvenirs (although she still signs them) and apple pie. And instead of Elvis, Bachmann’s jingle of choice is now Train’s “Hey Soul Sister,” a song the Village Voice once described as a “warm washcloth of facepalmy puns and cutey-poo pukulele.” In the parking lot of Legends American Grill in Marshalltown, the 98th and penultimate stop on her weeklong tour of Iowa’s 99 counties, Bachmann bounces out of her bus, pukulele on the speakers, doles out a few hugs and handshakes, and spends about 30 seconds cutting the rug with a 9-year-old boy in a blue Marshalltown Bobcats t-shirt. “I’ll dance with you anytime,” she says, high-fiving. “Do you know that song? Do ya?” He nods yes. They pose for a photo, Bachmann crouching at the boy’s side, and she makes him a promise: “I’m gonna dance with you again sometime, okay?” The iPhone cameras pop out, reporters scramble for the kid’s name, all seems well in Bachmann world.

It is the kind of interaction—disarming, youthful, humanish—that Mitt Romney never seems to pull off, and one that makes you think that even without the pomp and bombast of her earlier campaign, Bachmann still might have a shot at this thing.

Legends American Grlll is packed with maybe 150 supporters and a fair number of undecided voters all split into adjoining rooms, so Bachmann has to deliver her speech from the doorway, hopping back and forth from one room to another and, periodically, turning to face the press. She moves through her usual applause lines—”If you can’t have liberty on your light bulbs, you’ve got nothing!”—and reminds everyone that unlike Ron Paul, she’d find a way to stop Iran from getting nuclear weapons. Also vying for the crowd’s attention: about two-dozen flashing 60-inch tv screens, at least a couple of which are showing a monster truck rally.

“Right now in the United States, we need another strong conservative to stand up,” she says, hitting the home stretch. “We need another Margaret Thatcher. Another Iron Lady. That’s what I want to be. I want to be America‘s Iron Lady. America‘s Margaret Thatcher.” And it’s not just a bit of hopeless idealism; she really thinks she’ll get there: “Of all of the candidates in this race, I am the most electable.” Up on the big screen, a monster truck (“Iron Lady” would be a good name for a monster truck) takes another victim, and the camera flashes to its steel undercarriage. Bachmann’s oblivious to the carnage happening just feet away, but her message tracks nicely. She turns around in her doorframe and points to her back: “This is my titanium spine,” she says. Winning in Iowa, like mincing an Oldsmobile, is a test of what you’re made of.

Either Bachmann lied, or her topmost aide did.

Bachmann manages to hold the crowd’s attention and even win a few converts, which she’ll need given how far she’s fallen; about 10 percent of Iowa Republicans are former supporters. She’s either in the high single-digits or low double-digits in the state, depending on which poll you consult, but nowhere near the top (as she was when Rick Perry entered the race in August). And the night before her appearance at Legends, Bachmann’s Iowa campaign chair, State Sen. Kent Sorenson, her very first Iowa hire of the 2012 race, publicly endorsed Paul just three hours after appearing at a rally with the congresswoman. Bachmann alleged that Team Paul paid Sorenson to switch sides—fighting words—which Sorenson and Team Paul fiercely denied. And then, in another twist, Bachmann’s own political director, Wes Enos, disputed Bachmann’s account. Enos has since left her campaign, although he says he’ll caucus for Bachmann.

Either Bachmann lied, or her topmost aide did. It’s been a recurring theme throughout a campaign in which personnel battles have repeatedly played out in public. (As he exited her campaign, former strategist Ed Rollins said he never would have worked for Bachmann if he’d just Googled her first.)

Iowa state sen. Brad Zaun, who took over for Sorenson, declined to elaborate on his predecessor’s sudden departure when I spoke with him at Legends. “I think the facts will come out, and I think there will be more and more people that will come out speaking about this issue. And out of respect for someone that I serve with, I’m gonna have no comment about that.” Matt Floyd, a pastor from Osceola who endorsed Bachmann earlier this month because he believes she’s “biblically oriented,” took the same tack. “I know Kent. I respect him, but I respect Michele even more. As stuff comes out, let it come out.”

But not everyone’s being so demure. “That’s despicable; it reflects badly on Iowans,” said Steve Leschin of Marshalltown. Leschin’s mother stands by his side, looking taken aback by her son’s agressively hostile tone as he rails against Sorenson: “He’s the treacherous one. I love Ron Paul, and I love Michele Bachmann. But what [Sorenson] did is despicable, to do that at the 11th hour.”

Leschin isn’t bothered by the conflicting accounts coming out of the Bachmann campaign, nor is he particularly bothered by the idea that his preferred candidate might tell a whopper every now and then. “Gosh knows the other side embellishes, too.” Fits on a bumper sticker, at least.

Bachmann left Legends for a final tour stop in Nevada, Iowa, where she showed reporters her iPhone call log, indicating that Sorenson had called her on Wednesday afternoon, presumably to chat about his decision to jump ship. The call log punches an opening, albeit a very small one, into Sorenson’s alibi that he had said just three words to Bachmann all day on Wednesday and had never offered any extended explanation of his decision. Absent an actual transcript, there’s no reason yet to draw any larger conclusion from the call log. The facts will trickle out, as Zaun and Floyd insist. Until then, Bachmann’s campaign is spending these last days before the Iowa caucus fending off rumors of its demise.