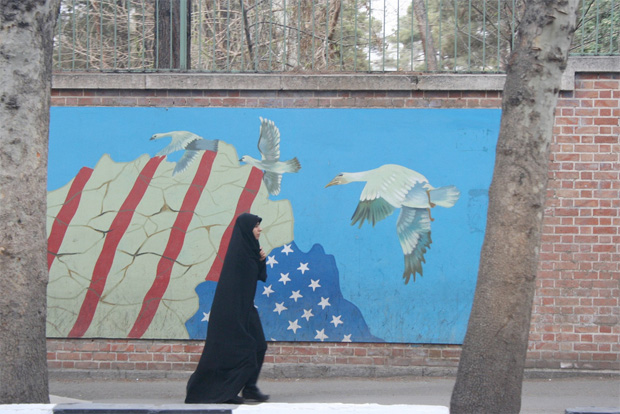 Outside the former US embassy in Iran. Ninara/Flickr

Okay, you’ve probably heard by now about Michele Bachmann’s latest ride on the gaffe train: Talking to supporters in Waverly, Iowa, Wednesday afternoon, the firebrand congresswoman declared that if she were elected president, “we wouldn’t have an American embassy in Iran.” As just about everyone in the press corps promptly pointed out, the US hasn’t had a diplomatic presence in Tehran since 1979, when there was this little Shi’ite revolution thing, and workers at the US embassy were held hostage for a year by Iranian students sympathetic to the new revolutionary government.

But…what if we give Bachmann the benefit of the doubt? There is, after all, still a building that used to be the US embassy in the Iranian capital. It’s reportedly now a museum dedicated to American terribleness—according to Lonely Planet, this “US Den of Espionage” is No. 35 on the list of top 95 things for tourists to see in Tehran.

If so, Bachmann’s actually on the cutting edge of international relations theory: In one short statement, she’s managed to simultaneously construct a national security threat and deconstruct it by predicting its annihilation. Political scientists, let’s call this exciting new process “threat derationalization.”

[Update: A damage-control statement by the Bachmann campaign insists that the congresswoman was “speaking in the hypothetical.” So much more comforting.]