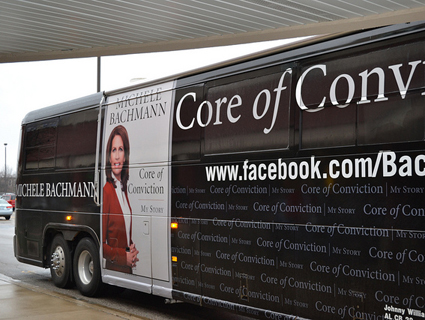 Bachmann won’t win the Republican nomination, but her campaign is on the upswing in Iowa, where the latest Public Policy poll has her breaking double digits for the first time in months. Last week, she kicked off a 99-county bus tour, to visit every corner of the state, and she seems to think she might actually have an outside shot at winning the caucuses. The days when she had to yell frantically at debate moderators to get a little face time have passed, at least for now. What’s her secret? It’s the world’s most perplexing social media platform this side of Ping.

There she was, at the Thirsty Dog in Manly on Sunday evening. Four minutes earlier, if Foursquare can be trusted (and I would suggest to you that it must, it simply must) she was at the Prime and Wine in Mason City. That followed a stop at Shooterz Bar in Forest City (try the meatloaf), and successive appearances at Pizza Ranch franchises in Garner and Clarion. She started the day by checking in at Harvest Baptist Church in Fort Dodge (with two others). On Saturday, it was much of the same: Pizza Hut in Ida Grove (where she unlocked the “Bender” badge for checking in for the fourth consecutive night)—and three more Pizza Ranches, in Rockwell City, Pocahontas, and Emmetsburg.

Oh, and the compulsory visit to Cronk’s in Denison, where this happened:

She held off on tweeting about it, at least. On Friday she as at Hey, Good Cookies in Spirit Lake, Cool Beans coffee shop in Estherville, and—noticing a trend here—Pizza Ranch in Sibley.

So what does this all mean? Michele Bachmann goes to a lot of pizza places: In Garner, she unlocked the Level 2 Pizzaiolo badge; as I’m writing this, she’s just checked into the Princess Grill and Pizzeria in Iowa Falls, and she’ll have stops later on Monday at Pizza Ranches in Charles City and Waverly. But there’s a method to all of it. As Kerry Howley reported in March, Pizza Ranch holds a unique place in Iowa politics. When Mike Huckabee won the caucuses in 2008, he did it by hitting all 69 franchises in the state. Social conservative activist Bob Vander Plaats (of marriage pledge fame) has used the buffet-style chain as a staging ground for his own campaigns. It’s a way of microtargeting the predominantly old, predominantly evangelical voters who will decide the results on January 3.

Of course, the senior citizens who hang out at Pizza Ranch to listen to Michele Bachmann talk about Alfred Kinsey are also, generally speaking, not the sort to unlock the oversharing badge on Foursquare. Which just goes to show you that while candidates have more social media tools at their disposal than ever before, they’re still not entirely sure what to do with them. That is, unless Bachmann becomes Mayor of the Iowa caucuses.