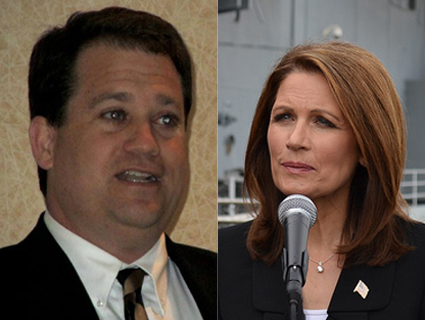 The most recent poll out of South Carolina, like the poll before that and the poll before that, doesn’t look very good for Michele Bachmann. She’s currently in fifth place, tied with Ron Paul, and just a few points shy of the basement. So on Tuesday, looking to give herself a little bit of momentum, she announced her new South Carolina campaign chair: State Sen. Lee Bright.

Bright’s a strong social conservative in a state where that means a lot. But he’s also got some baggage. As the Minnesota Independent‘s Jon Collins reports, he’s also got in trouble in the past for joking about secession after introducing a bill to reaffirm South Carolina’s sovereignty, telling a local paper, “If at first you don’t secede, try again.” And earlier this year, he floated a proposal to allow the state to print its own currency:

Bright introduced his bill to study the creation of a new South Carolina currency earlier this session. The resolution argues that the right to print currency can flow from the state’s constitutional police powers.

“[M]any widely recognized experts predict the inevitable destruction of the Federal Reserve System’s currency through hyperinflation in the foreseeable future,” the resolution reads. “[I]n the event of hyperinflation, depression, or other economic calamity related to the breakdown of the Federal Reserve System, for which the state is not prepared, the state’s governmental finances and private economy will be thrown into chaos, with gravely detrimental effects upon the lives, health, and property of South Carolina’s citizens, and with consequences fatal to the preservation of good order throughout the state.”

South Carolina is one of more than a dozen states that have issued similar legal-tender legislation as part of an effort to bring down the Federal Reserve from the bottom up. Bright also co-sponsored legislation to ban Islamic Shariah law from being considered in state courts.