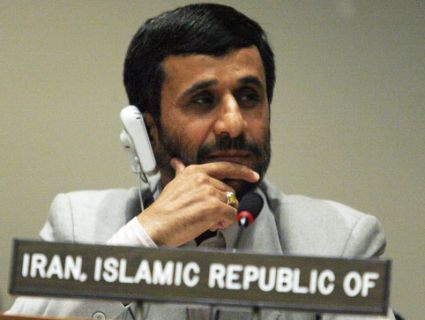 Now that the essential Defense Authorization Bill has passed through the House and Senate, it carries with it a hard-line amendment that would level sanctions against Iran’s central bank. The policy, experts say, could not only inflict pain on Iran for its nuclear weapons ambitions, but also potentially cause global economic repercussions. The White House has been against the amendment. Congress overwhelmingly voted for it.

If signed into law by President Obama, the new sanctions will be enforced against foreign institutions in Europe and around the world that do business with the Central Bank of Iran. (American companies are already forbidden to do so.) Because the CBI acts as negotiator for Iranian oil prices, these sanctions could force banks and companies worldwide to make a choice: terminate participation in the oil trade with Iran or face a penalty from the US. After strong pushback from the White House, which believes the sanctions could be too economically destabilizing, congressional leaders agreed to add a waiver that, according to Foreign Policy‘s Josh Rogin, would give the “president slightly more flexibility in waiving some of the sanctions on national security grounds.” Apparently it may be just enough wiggle room: The White House announced on Wednesday that the president would not veto the bill, despite prior threats that he would.

But the amendment, sponsored by Senators Mark Kirk (R-Ill.) and Robert Menendez (D-NJ), has some experts worried about its potential impact.

Robin Mills, an energy expert and columnist at The National, says, “If the sanctions were successful in substantially reducing Iranian oil exports, then world oil prices would rise significantly—but panic might take prices [even] higher.” The Wall Street Journal has reported that disrupting Iran’s oil exports could increase gas in the US by as “much as $1 more a gallon, even though the U.S. doesn’t import any Iranian oil.” And higher gas prices could damage the nation’s already gloomy economic outlook.

Administration officials have repeatedly voiced their disapproval. David Cohen, Undersecretary of the Treasury Department, told the Senate recently: “Our judgment is that the best course to pursue at this time is not to apply a mechanism that puts at risk the largest financial institutions, the central banks, of our closest allies.”

Reza Marashi, research director at the National Iranian-American Council, says the sanctions could put the US in a serious bind: “If the U.S. moves forward without broad support from Europe and elsewhere, it may face a situation where it has to either back down or ban important foreign companies and governments from using the U.S. financial system.” The sanctions could also prove disastrous for the Iranian people, says Marashi, who suggests they could eventually devastate the Iranian population similar to the way in which Iraqi people suffered under harsh measures against Saddam Hussein.

That prospect does not seem to bother Kirk. When asked earlier this year how he felt about sanctions affecting ordinary Iranians, the senator told a Chicago radio show, “It’s okay to take the food out of the mouths of the citizens from a government that’s plotting an attack directly on American soil.” Last week, Kirk boasted in The Hill that support in the Senate for the current Obama policy on Iran “has collapsed.” Referring to the unanimous vote in his chamber, he said, “You don’t get any better than 100-to-zero.”

Congressional Democrats had aligned themselves with the GOP and even conservative think tanks on the Iran sanctions issue long before the Kirk-Menendez legislation. In October, a news report in the Washington Post signaled that Democrats had grown “impatient” with “the administration’s policy of trying to engage Iran through a series of carrots and sticks.” Earlier this year, Howard Berman (D-CA), ranking member of the House Committee on Foreign Affairs, said sanctions imposed by the Obama administration were “sending Iran a signal more of weakness than of strength.”

And as the bill moved through Congress in early December, one politician chastised the Obama administration’s position by saying “We shouldn’t be leading from behind, we should be leading forward.” That may sound like Michele Bachmann, using a riff popular among the GOP presidential candidates when attacking Obama on foreign policy. In fact, it was Sen. Menendez, of Obama’s own party. Even John Kerry (D-MA), a favorite foreign policy fixer for the Obama administration, voted for the amendment. On Tuesday, Kerry tiptoed around an explanation for his vote: “If I had been a member of the administration I would have probably have said ‘wait.’ I’m not, and I voted the way I voted…it may be helpful to [the administration] and helpful to the country in the long run.”

Whether or not the president has come around to that view is unclear. For the moment, the State Department and other White House officials are remaining silent on the matter.