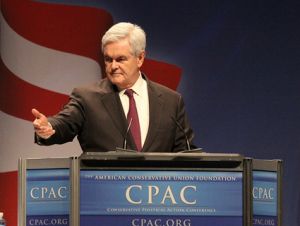 At Saturday’s GOP presidential forum in Iowa, newly minted frontrunner Newt Gingrich tore into the Occupy Wall Street movement, pointing to it as a symbol of exactly what’s wrong with America. “All the Occupy movement starts with the premise that we all owe them everything,” he explained. “That is a pretty good symptom of how much the left has collapsed as a moral system in this country, and why you need to reassert something as simple as saying to them, ‘Go get a job, right after you take a bath'”:

Take that, hippies! Gingrich’s zinger is part of an age-old argument on the right, which feebly insists that unemployment is actually caused by systematic laziness on the part of the unemployed rather than structural problems. Which isn’t to say OWS went entirely unrepresented at the Thanksgiving Family Forum in Des Moines. Prior to the debate, GOP moderator Frank Luntz turned the floor over briefly to an OWS protester and gave him two minutes to explain his grievances. The protester turned out to be a fairly run-of-the-mill Ron Paul supporter, and spent his time railing against the Federal Reserve. America!