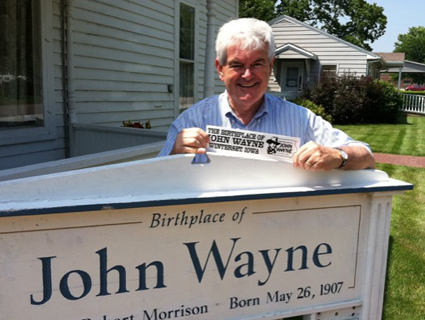 To date, the one-liner of the 2012 presidential campaign belongs to Rep. Barney Frank (D-Mass.), who in an interview with Chris Matthews on Thursday, said of Newt Gingrich’s consulting company, “‘Frankly, I thought the ‘Gingrich Group’ were his wives.” (Gingrich has been married three times—zing!)

Frank rarely needs an excuse to pop off, and Gingrich has given him plenty in recent months. At a debate in October, for instance, the former House speaker called for Frank and former Sen. Chris Dodd (D-Conn.) to be thrown in jail for their ties to the mortgage industry, which is not the kind of charge you just casually throw out.

So, what’s at the root of the Gingrich-Frank hate-fest?

It depends on who you ask. Frank’s explanation speaks to an underlying criticism of the former Speaker: “I despise Gingrich because of the negative effect he has had on American politics.” As he told Mother Jones in 1995, he thinks Gingrich is a phony intellectual driven only by a lust for power: “That’s why he says so many wrong things: He doesn’t know a lot about substance. He half-reads some future-oriented books and out of that comes a gabble that’s not terribly coherent.” Boom.

But there’s a personal element to it as well. Frank was the only openly gay member in Congress in 1987 when, in an effort to derail the speakership of Tom Foley (D-Wash.), Gingrich aide Karen Van Brocklin leaked to reporters that Foley was gay—and that he had an affection for young boys to boot. Frank called Van Brocklin “Madame DeFarge” and added, “When people use these smarmy, smearing methods, use it as a weapon, it reinforces the idea there is something wrong with being gay.” Gingrich, in a 1995 speech in which he lamented that “Barney Frank hates me,” suggested that the animus was driven by his push to censure Frank for an ethics scandal in which Frank had put a male prostitute on the congressional payroll (you could see how that might make Frank unhappy). And in 1995, when Gingrich opposed anti-discrimination laws for LGBT workers, Frank went after him, hard: “He just had you guys in the media kidded by saying he was for toleration. By toleration he means no hitting.” Newt, he said, was “one of the most energetic homophobics” in Congress.

Frank even devotes a significant portion of his authorized 2009 biography to discussing Gingrich, and why he can’t stand him. According to Frank, Newt is “a bleeder” and “the thinnest-skinned character assassin I ever met.”

Frank is Gingrich’s natural foil—someone who is not only totally unimpressed by Gingrich’s Big-Thinker tone, but also capable of undermining it with a swift one-liner. (Frank is also gay, and proud of it, whereas Gingrich believes that “gay and secular fascism” is destroying America from within.) But there’s another aspect to it all, which isn’t likely to go away any time soon: Frank was exposed to Gingrich at his most indulgent and self-destructive, and was privy to some less-than-flattering elements of the Newt narrative.

Gingrich had been having an affair with his current wife, Callista, for six years before he finally separated from his second wife. And that dalliance was a poorly kept secret on Capitol Hill. World magazine, in a piece examining Gingrich’s personal life from an evangelical perspective, spoke with former Rep. Bob Dornan (R-Cal.) who offered this nugget:

Dornan says he confronted Gingrich once in late 2000 or early 2001 in a Fox green room and told him, “Newt, you know that [former GOP Rep.] Steve Gunderson was telling Barney Frank everything about Callista. They were jerking your chain.” Dornan says Gingrich responded, “Well, I always thought they knew.”

Dornan says the transmission chain was Gunderson to Democrats and onward to Clinton.

The fact that Frank might have known about the affair all along and quietly used it as political leverage—as Dornan suggests—certainly wouldn’t have done much to cool Gingrich’s resentment of Frank. (Dornan, incidently, also hates Gingrich).

So that’s ultimately what makes Frank v. Gingrich more than just a casual flame war. Frank represents what Gingrich might call a “fundamental structural weakness” in his candidacy. Namely, that he has a 33-year track record of alienating the people works with—and they haven’t forgotten.