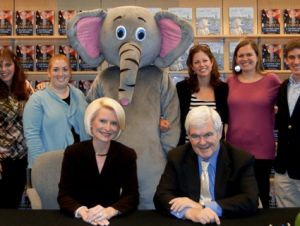 When Newt Gingrich was asked by CNBC’s John Harwood why Freddie Mac paid him $300,000 in 2006, he played his wild card: He was hired, he said, for his analysis as an “historian.” We called baloney—and sure enough Bloomberg reported on Tuesday that Gingrich more or less did the opposite of what he said he did. And now they have a follow-up, with the full price tag: Over eight years, Gingrich was paid $1.6 million, or approximately 100,000 $16 muffins, for his work.

The total amount is significantly larger than the $300,000 payment from Freddie Mac that Gingrich was asked about during a Republican presidential debate on Nov. 9 sponsored by CNBC, and more than was disclosed in the middle of congressional investigations into the housing industry collapse.

Gingrich’s business relationship with Freddie Mac spanned a period of eight years. When asked at the debate what he did to earn a $300,000 payment in 2006, the former speaker said he “offered them advice on precisely what they didn’t do,” and warned the company that its lending practices were “insane.” Former Freddie Mac executives who worked with Gingrich dispute that account.

The former officials said he helped craft and shape the agency’s message in its efforts to win over lawmakers. That’s in contrast to Gingrich’s more recent statements; asked about his efforts by Harwood, he said he had sharply criticized the mortgage giant’s housing policies and warned that its practices could hurt the economy.

Should his current surge in the polls continue much longer, it’s unclear what will hurt him more: His business dealings after leaving the House, or his business dealings while he was still in the House, which prompted him to resign in disgrace. Or given the GOP base’s ability to look past the flaws of any candidate not named Mitt Romney, he might just be in the clear.