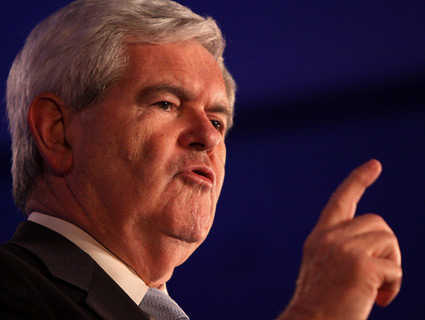 The Thanksgiving Family Forum on Saturday wasn’t really a debate per se; it was more of a “Jesus is even better than Ronald Reagan” powwow hosted by noted pollster Frank Luntz.

For instance, Herman Cain said that people of faith “have been too passive” and that “we haven’t fought back” enough for the right to “express [our] faith in any setting.” He also inserted an applause line that took a swipe at the “political correctness police” who have allegedly kneecaped religious liberty in the country. That basically set the tone for the rest of the Republican candidate get-together (sans Mormons Jon Huntsman and Mitt Romney).

Family values paragon Newt Gingrich followed-up with his patented critique of effete, soulless secularism, putting his background as a historian to good use:

“None of the Founding Fathers would have said education without character is useful; they would have said it was in fact dangerous,” Gingrich said. He went on to assert that “what we have now [in American society] is an outgrowth of the French Revolution,” which the former House Speaker defines as the wholesale “rejection of the larger world in favor of secularism.” This is the same anti-faith decadence that pollutes the US court system, Hollywood, public education, and so on, Gingrich insisted.

Gingrich’s effort to breathe new life into the so-called culture wars has been ongoing for quite some time now. His professed fear of America devolving into a “secular atheist country” was his go-to rhetoric since the beginning of the Obama era, and the book title To Save America: Stopping Obama’s Secular-Socialist Machine doesn’t leave much to the imagination regarding where he stands on “values.”

It’s still worth noting that the latest supposed front-runner in the GOP 2012 field continues to claim that school teachers, activist judges, and George Clooney are all dragging American society right back into the dark ages of the Reign of Terror.

Perhaps all the comparisons to Nazi Germany and Stalin’s Russia were finally wearing a tad thin.