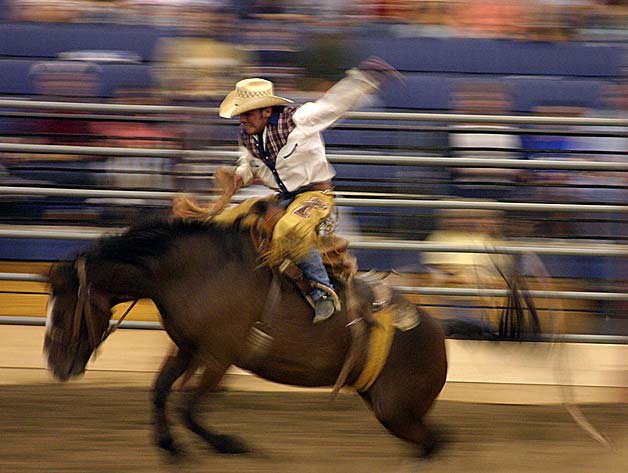 After reading Deborah Nelson’s incredibly depressing piece on circus elephant abuse, I’m pretty sure I’ll never enter the Ringling Bros. big top again. But it did get me wondering about other forms of animal entertainment.

Just a few weeks ago, some friends and I went to the Grand National Rodeo. Protesters outside the arena warned us that “rodeos are not fun for the animals.” Yet inside, the announcer assured us that the horses and cows were well cared for and healthy, and that they even enjoyed the “exercise” of shaking off hapless cowboys. And after watching one guy limp out of the ring after getting dragged by a bucking bronc, I had to admit that it did seem like the riders took more abuse than the animals. So are all animal shows really as cruel as Ringling Bros.? Or is there such thing as good old-fashioned performing-critter fun?

The law subjects tigers to the same confinement rules as monkeys or dogs.

Unsurprisingly, circuses that they adhere to rigorous standards of animal welfare. Ringling Bros. says that its approach to animal training is “built on respect, trust, affection and uncompromising care.” Yet by law, circuses are really only required to follow one piece of legislation: the Animal Welfare Act. Enacted in 1966, the law is meant to regulate “the treatment of animals in research, exhibition, transport, and by dealers.” But Delcianna Winders, PETA’s director of captive animal law enforcement, told me that the AWA has been criticized for its lack of species-specific rules—under the law, an elephant or a tiger is subject to the same confinement rules as, say, a monkey or a dog. And even when USDA inspectors find evidence of abuse, as Nelson shows in her piece, the animal keepers often get away scot-free.

The USDA lists 29 circuses that hold wild-animal licenses. But Will Travers, CEO of the animal advocacy group Born Free USA, estimates that “there are at least half a dozen more large-scale circuses featuring wild animals, and an unknowable number of small local circuses featuring animals, both licensed and unlicensed.” Both Born Free USA and PETA have good listings of incidents of circus animal abuse and neglect. Courtesy of PETA, here are some of the USDA citations recently racked up by circuses, many of them small or regional acts:

I told Winders that I was having trouble finding a similar USDA listing for rodeo citations. “That’s because it doesn’t exist,” she said. That’s right: Even though the Professional Rodeo Cowboys Association says that “The PRCA and its members value their animals and staunchly protect them with specifically created rules,” rodeos are exempt from having to follow the Animal Welfare Act. * (Also exempt are pet stores, state fairs, dog and cat shows, and “any other fairs or exhibitions intended to advance agricultural arts and sciences.” I bet it’d be interesting to look around for ag industry lobbying around the AWA.)

Under the Animal Welfare Act, rodeos are exempt from USDA inspection.

So how do you know whether a performing animal is being treated well? In 2008, the artistic director of the Big Apple Circus told the New York Times, “By simply looking at the animals in our ring, you can see that they are healthy, interested in their surroundings and enjoying the bond with their trainers.” But Travers says it isn’t that simple. Even if it’s technically healthy, “a performing animal can’t tell you whether it’s happy or not,” he says. “You’re asked to suspend your disbelief and enter an imaginary world, so it’s easy to convince yourself that the animals are happy.” Chances are, says Travers, that an animal that is “swaying or rocking, or pacing in a specific pattern over and over” is not happy.

The good news is that a few areas have made their own rules to protect animal performers. Cities and towns that have banned acts with wild animals (PDF) include Boulder, Colorado, Stamford, Connecticut, and Pasadena, California; similar rodeo legislation by state is here. A bill introduced just last week would forbid all exotic and wild animals from performing for 15 days if they have been traveling in mobile shelters.

My two cents: I probably won’t be going to the rodeo again, and I’ll stick to circuses sans critters. If your kid is clamoring for a trip to the big top, PETA has a good list of animal-free circuses here. If you just can’t bring yourself to skip the animal entertainment, check out Born Free USA’s database of incidents involving exotic animals by state or search USDA citation reports. If you suspect that a show animal is being mistreated, tell the USDA.

Correction: An earlier version of this article incorrectly stated that rodeos were only exempt from USDA inspections. They are actually entirely exempt from the Animal Welfare Act. The sentence has been corrected.