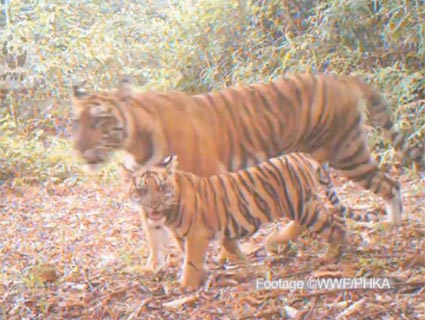 Over at Yale E360, you can watch a great World Wildlife Fund video showing the areas of the Sumatran rainforest slated to be logged in the near future. Sumatra is home to a pretty astounding array of wildlife, including rhinos, orangutans and tigers. Last week, WWF released rare footage of 12 critically endangered tigers in the area, including a mom and two cubs. Only about 400 Sumatran tigers are left in the world.

The video mentions one particular company responsible for much of the Indonesian rainforest destruction: Asia Pulp & Paper, a major subsidiary of the Sinar Mas Group, an Indonesian mega-conglommerate known for its cozy relationship with the Suharto family. APP’s realm of influence is truly vast: The 5 million tons of paper it produces annually are sold in 65 countries on six continents.

APP has long been on environmentalists’ radar; it has been accused of illegal logging in Cambodia and Indonesia, and a 2008 investigation by the rainforest advocacy group Eyes on the Forest suggested that companies connected to APP had illegally built a road through a part of Sumatra that was one of the world’s biggest carbon stores.

And yet APP still has a firm hold on the US paper market. According to Greenpeace, KFC and several other fast-food chains owned by Yum Brands are among its major US buyers. And it enjoys political support, too: In March, the New York Times reported that the Tea Party-affiliated group Institute for Liberty has been lobbying to protect APP’s right to sell paper products to the US without having to pay tarrifs. (The Insitute for Liberty is known for its massive pro-business astroturfing efforts;it has defended Monsanto’s right to sell genetically modified alfalfa, and MoJo‘s Stephanie Mencimer recently reported on its campaign against net neutrality.)

APP has tried to spiff up its environmental rep with a major PR push; its website claims that it is “committed to protecting biological diversity, particularly with regards to native plant species, Sumatran tigers, elephants, orangutans, birds and other animals.” The site also brags that APP’s carbon footprint is “remarkably close to neutral.” But last year, the Rainforest Action Network revealed that APP’s calculations of its footprint are sorely lacking, since they don’t take into consideration the carbon-storing peatlands that APP has destroyed.

Despite the greenwashing, APP’s lousy environmental track record finally seems to be catching up with it; several American chains, including Staples, Office Depot, and Target, recently ended their contracts with the paper giant. Will others follow suit before it’s too late for the tigers?