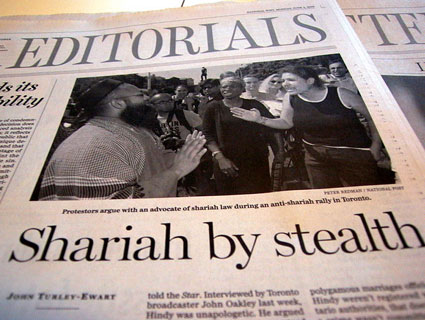 Between the deaths of Osama bin Laden and Moammar Qaddafi, it’s hard out there for conservatives trying to portray President Barack Obama as weak on foreign policy. But with Libya Transitional National Council Chairman Mustafa Abdel-Jalil’s announcement over the weekend that Libya would have “Islamic Shariah law [as] the basis of legislation,” the right is settling on a narrative: Obama is making the world safe for Shariah!

There are a few problems with this line of argument, but the most obvious is that President George W. Bush invaded two mostly Muslim countries, Iraq and Afghanistan, and both of them adopted constitutions that identify Islam as the state religion and decree that laws have to be consistent with the precepts of Islam. Despite this, both constitutions contain provisions respecting the rights of religious minorities—as does Libya’s draft constitution.

That’s not to say that there’s nothing to worry about—any country that identifies one particular religion as its “state religion” will, by definition, end up treating religious minorities as second-class citizens in some fashion. Indeed, Iraq and Afghanistan’s religious minorities continue to face persecution. But it’s not like the Libyan TNC writing Islam into its constitution is an Obama-sponsored departure from the Bush policy of midwifing fully formed Madisonian democracies from the ashes of despotic regimes. You can have American-backed dictators forcing nominal secularism onto Muslim countries at gunpoint or you can have popularly elected governments reflecting the will of the mostly-Muslim populations of these countries, but you can’t have both.

Conservative blogger Scott Johnson mocks Obama for saying shortly after Qaddafi was killed that “We’re under no illusions—Libya will travel a long and winding road to full democracy.” Now you’d think that people from a country that wrote the right of white people to own black people as property into its Constitution and then fought a brutal civil war over it that killed a full two percent of its population might have some understanding of the fact that the road to “full democracy” isn’t exactly a smooth one, but, you know, Orientalism.

As the process of building democratic societies in Libya, Egypt, and Tunisia goes forward, the rights of women and minorities should remain a priority for the US and the world at large. But wringing one’s hands over the idea that Islam will likely play a prominent role in the Middle East’s fledgling democracies is pointless. The US can’t force its preferred outcomes in those countries any more than the fallen dictators who used to be in charge. It’s hard to teach pluralism and tolerance at gunpoint. Those are values societies have to learn on their own.