The Center for American Progress released a very comprehensive report Friday morning that traces the origins, extent, organs, and funding sources of the Islamophobia movement. The thesis is that there’s no “vast right-wing conspiracy behind the rise of Islamophobia in our nation but rather a small, tightly networked group of misinformation experts guiding an effort that reaches millions of Americans through effective advocates, media partners, and grassroots organizing.” They pinpoint a handful of think-tanks and non-profits that are responsible for the intellectual (to put it generously) grist that’s served as the basis for everything from mosque protests to lawsuits to legislation to hate crimes, and follow the money, revealing that a huge lump of the funding—$42 million over nine years—comes from just seven sources.

I’ll be diving into this a bit more deeply later, but for now I just wanted to highlight this map, which is an updated/spiffier version of the one I created way back when: 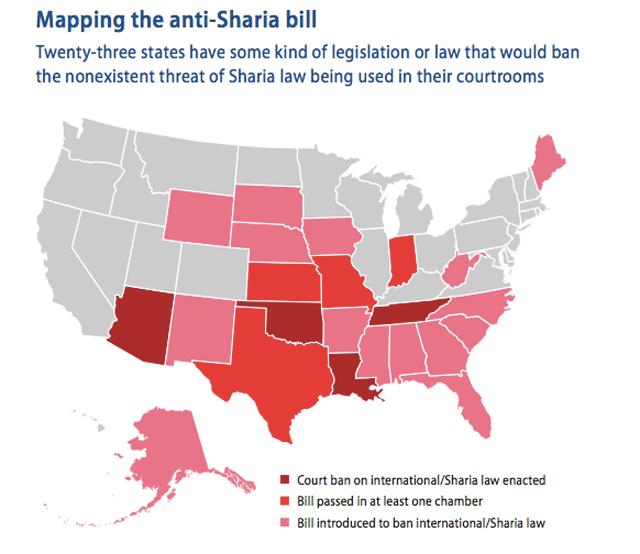 Given the deep-seated religious tensions at play here, I think the Islamophobia movement goes a bit deeper than the report necessarily gives it credit for—plenty of pastors would be talking about “Clash of Civilizations” regardless of whether Frank Gaffney gets his check from the Richard Mellon Scaife Foundation. But this map, charting the mushrooming of nearly-identical bills to ban Islamic law from being applied in American courts, shows the power that a small but dedicated network—led, in this case, by Arizona attorney David Yerushalmi—can have.