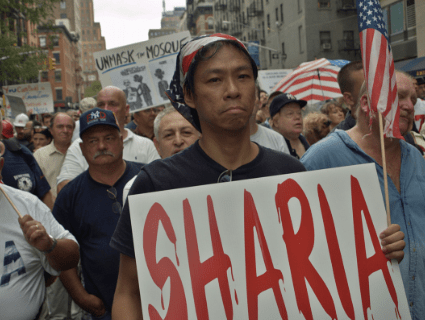 If you didn’t buy your plane tickets yet to November’s Preserving America Conference in Nashville, you might want to wait a little while. The Veterans Day conference is dedicated to combatting the very, very stealth threat posed by Islamic Shariah law in the United States. But on Thursday, the hotel that was scheduled to host the shindig announced that it was cancelling the contract and asking organizers to find a new location. That’s too bad, because Central Tennessee—where local activists (with some help from GOP presidential candidate Herman Cain) have been pushing to halt the construction of a mosque they believe is a front for the Muslim Brotherhood—seemed like a natural place for the conference. Per the Tennessean:

Steve Eckley, senior vice president of hotels for Amerimar Enterprises, said he wasn’t fully aware of the topic or the people involved when he booked the event in Nashville, and now he fears that resulting protests could turn violent. As well, the hotel’s other clients that day expressed concerns.

Devastating. Given that these kinds of events go off without incident all the time in the United States, it’s hard to see why the hotel was so concerned about violent protests. As the Murray’s reaction suggests, the only real consequence of the cancellation will be to further the organizers’ perception that their views under siege, and the Caliphate is one step closer to being realized. Anyway, according to the conference’s website, the event will be headlined by Center for Security Policy’s Frank Gaffney (who believes Grover Norquist’s American Conservative Union has been infilitrated by the Muslim Brotherhood), blogger Pamela Geller, former congressional candidate Lou Ann Zelenik, and—not making this up—“Gopher” from Love Boat: