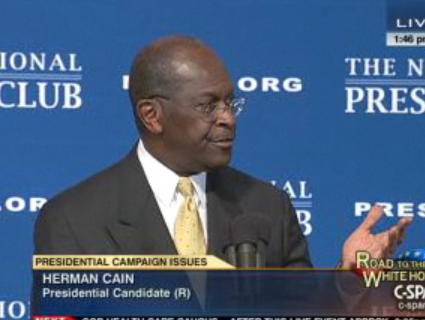 GOP presidential candidate Herman Cain just finished up a 30-minute press conference at the National Press Club in DC by singing, at the request of the moderator, “Amazing Grace.” That came just a few hours after Cain was aked at the American Enterprise Institute what fellow presidential candidate he’d dress up as for Halloween (answer: Ron Paul). But, on a day he’s been accused of possibly breaking federal campaign finance laws, and forced to respond to reports of sexual harassment, Cain was asked some nuts-and-bolts policy questions, too.

Specifically, the former talk radio host and Godfather’s pizza CEO was asked what he would do to control the rising cost of attending college—and what actions he might take to make student loans more manageable. Cain’s answers were revealing:

Pressed in a follow-up on how he might address the ballooning costs of students loans, he answered: “I don’t have a position on what we ought to do about all of the student debt that some of the students have run up. I don’t have a position on that right now. It’s unfortunate, but it is obviously something that we are going to have to deal with.” It’s a question of immense importance, and not just for the We Are the 99 Percent folks either. Last week, President Obama announced a plan to attempt to lower the student loan burden on recent college grads. Obama’s plan might not make much of a difference, but considering student loan debts have increased 511 percent since 1999—totaling nearly a trillion dollars—it’s clearly the kind of problem that’s badly in need of a fix. Just take a look at the chart on the left, from our college guide.

It also suggests Cain hasn’t given much thought, ever, to higher education policy. There is a market when it comes to college tuition—it just so happens it’s totally dominated by the producers and not the consumers. Even as the cost of teaching has gone down, the cost of tuition has risen across the board, at a rate that far outpaces inflation, as well as (in the case of public universities) budget cuts. Rather than driving down the cost of college, the higher education market has for the last few decades been driving costs higher and higher.

This is, incidentally, the kind of question we should see more of at events like this, as well as at debates. Student loan reform is a serious topic, with a ton of money at stake (not to mention the livelihood of a lot of people in my generation), and one that candidates for the presidency should be expected to have put at least some thought into. But it’s not the kind of thing anyone in the GOP field will bring up unprompted. So kudos to the moderator for at least asking the question.