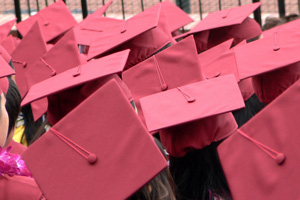 You’ve heard of subprime mortgages—the risky, high-interest-rate, often toxic home loans doled out like candy to borrowers who lacked the ability to repay them. In the Senate’s financial reform overhaul, a new consumer protection bureau would crack down on these shady loans and the predatory brokers who peddled them. But the Senate is poised to give a big pass to another form of subprime lending on the rise—high-risk student loans, a corner of the financial industry New York Attorney General Andrew Cuomo branded the “Wild West” of lending.

As tuition prices have soared, private student loans have become big business. According to the Department of Education, the percentage of students with private loans climbed from 5 percent in 2003-04 (about 935,000 borrowers) to 14 percent in 2007-08 (almost 3 million). The dollar amount of private loans swelled from $7.2 billion to $15 billion over that same period.

These loans, like other non-federal lending, are largely unregulated. Like subprime mortgages, many have uncapped, variable interest rates that are sky-high for low-income borrowers, according to the nonprofit Project on Student Debt (pdf). But there’s one key difference that sets them apart from shady mortgages: Unlike other debts, it’s nearly impossible to discharge student loans in bankruptcy. And although precise data on private student loan defaults is elusive, “The volume of people in trouble is definitely increasing,” Deanne Loonin, a staff attorney at the Boston-based National Consumer Law Center, told the Wall Street Journal.

The majority of borrowers taking out those riskier private loans are students at for-profit colleges, institutions run by private companies trying to make money—42 percent of students there have private loans, the Education Department found. And according to a November 2009 report by the Government Accountability Office (GAO), black students take out the highest percentage of private student loans when measured by race or ethnicity.

“Private student loans are exactly the kind of dangerously under-regulated financial product that the Consumer Financial Protection Bureau needs to oversee,” Pauline Abernathy, vice president of the Institute for College Access and Success, said in a statement. “Failing to give the new bureau full authority over all private student loans would leave young people and other vulnerable consumers, and our economy, at the mercy of unscrupulous lenders.”

The consumer protection bureau in the House’s bill would cover private lenders and predatory student loan practices. But under the Senate version of the bill, even Sallie Mae, the biggest of the private student lenders, would dodge the bureau’s supervision. The Senate bill grants the consumer bureau power to oversee and regulate banks and non-financial institutions with more than $10 billion in assets. Think payday lenders, mortgage brokers, mortgage servicers, auto dealers, and more. Utah-based Sallie Mae Bank, which finances the broader corporation’s private loans to students and made $5 billion in private loans in 2008-2009, has less than $10 billion in assets. It would therefore remain under the oversight of the Federal Deposit Insurance Corporation, and not a new consumer bureau. Responding to an inquiry by Mother Jones, a Sallie Mae spokesman, Conwey Casillas, said in a statement, “Today we are regulated like other financial companies, and we expect this to continue under financial reform legislation. Private education loans are indeed consumer loans and as such would be subject to the disclosures and requirements pertaining to consumer loans.”

Not all subprime student loans are bad, as they extend financing to low-income students and those with poor credit scores who might’ve exhausted all other financial aid options. But as Stephen Burd, the editor of the New America Foundation’s Higher Ed Watch blog, has written, Sallie Mae has often allied with for-profit colleges—not all of them reputable—and helped fund private student loans “with interest rates and fees totaling more than 20 percent per year, to financially needy students who normally wouldn’t qualify for them because of their subprime credit scores.”

In addition to the loans themselves, the Senate’s bill would also turn a blind eye to the predatory practices that private lenders use to sign up students. According to numerous investigations by the GAO, New York Attorney General Cuomo, and consumer advocacy groups, for-profit schools target low-income, minority, and even homeless students. Consequently, the loans they offer are often shockingly unfair and doomed to fail—not unlike the infamous no-income-no-job-no-assets (NINJA) mortgages of the subprime heyday. Officials at one for-profit school, Corinthian College, told investors last year that they expected a nearly 60 percent default rate on loans the school had given directly to students. Career Education Corporation, one of the schools with which Sallie Mae teamed up, was the subject of “multiple lawsuits in several states of using hard-sell tactics to recruit students, promising them high-paying jobs that don’t materialize and leaving them with mountains of debt that they can’t pay off,” according to a Fortune exposé.

Four students of Westwood College, an online institution that offers three-year bachelor’s degrees in areas like business and health care, have filed for class-action status* in a suit (pdf) against Westwood’s Colorado-based parent company, alleging that it pushes students into loans that have no limits and carry an 18 percent interest rate—nearly four times higher than federally subsidized loans. Westwood admissions officials, the suit says, are instructed to hide that steep rate from potential students “under any circumstance,” and to instead promote the fact that, while they’re still in school, the interest rate is zero and payments are capped at $150. The suit further claims that Westwood exaggerated the value of its degrees by inflating school-assisted job placement rates and fabricating relationships with employers like Sony and Electronic Arts. (A Westwood official told Newsweek the suit is “98 percent fiction.”)

Nearly six months after the Colorado suit, another class action (pdf) was filed against Westwood in Travis County, Texas, alleging that the company advertised and recruited students for programs for which it wasn’t accredited by the state of Texas. “Our biggest concerns with Westwood college are the deceptive practices used to lure students into their school,” said the attorney who filed the case, Jillian Estes. “The way they bring students in by promising them everything, but delivering them not nearly what they were promised.” In December 2009, Westwood reached a resolution with the Texas Workforce Commission on the college’s accreditation status.

A 2008 report from the National Consumer Law Center found that lenders often charge pricey origination fees and tack on yet more fees if borrowers request for forbearances, deferments, or even copies of loan histories. Unlike federal loans, which typically declare default if payments stop for nine months, private loans can go into default after one missed payment. “Defaults are growing, variable rates are climbing, and growing numbers of borrowers are unable to make payments,” the report found.

The loopholes for private student lenders haven’t gone unnoticed in the Senate. On May 3, Sen. Dick Durbin (D-Ill.), the majority whip and a longtime proponent of student aid reform, offered an amendment (pdf) to include Sallie Mae and other large private student lenders in the consumer bureau’s oversight by lowering. Cosponsoring the amendment from Durbin, who earlier this year also introduced a bill to let borrowers shed student debt in bankruptcy, are Sens. Russ Feingold (D-Wis.), Jeff Merkley (D-Ore.), Kirsten Gillibrand (D-NY), and Sherrod Brown (D-Ohio). A Durbin staffer told Mother Jones the senator’s office is “optimistic” the proposed rules will make into the final bill, either via a successful vote or by including the provision in a broader manager’s amendment to the financial bill.

* This sentence was clarified to reflect that the suit against Westwood has not yet been certified as a class suit.