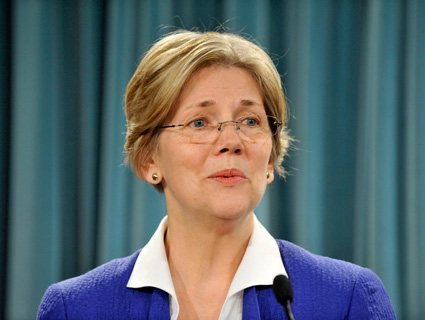 Elizabeth Warren, consumer advocate and chief architect of the Consumer Financial Protection Bureau, will announce on Wednesday that she will run for the U.S. Senate seat in Massachusetts currently held by Republican Scott Brown.

Should Warren prevail in defeating the six candidates who have already announced their intention to compete in the Democratic primary, the result may be the greatest economic boon to Massachusetts media outlets since the days of Kennedy money as Wall Street ponies up serious bucks in an effort to defeat their arch-nemeses.  Democratic contributors can be expected to respond in kind as bringing the Massachusetts senate seat back into the Democratic column is considered an important key to retaining the Democratic majority in the Senate.

While Warren is not expected to make a formal, public announcement, the Boston Globe reports that a video will go up on Warren’s website tomorrow announcing her intentions and saying, in part—

The pressure on middle class families are worse than ever, but it is the big corporations that get their way in Washington. I want to change that. I will work my heart out to earn the trust of the people of Massachusetts.

If track record counts for anything, you can believe that Elizabeth Warren will do precisely as she says. Because of that track record, the Harvard Law professor, who went to Washington and built a major following by relentlessly attacking the financial institutions for their anti-consumer agenda, will surely have the support of national progressives and Democrats, support she has unquestionably earned.

The possibillty of Warren’s election presents GOP senators with a rich dose of irony. Warren was the obvious and most deserving person to serve as the first leader of the CFPB, the consumer protection agency she almost single-handedly created. However, in an effort to protect their Wall Street cronies and financial backers, the Republicans in the Senate made it very clear that her nomination would never be approved.

As the administrator of the CFPB, Warren would have been under the thumb of Congress. As a member of the Senate, it will be a very different story.

Payback can be rough.