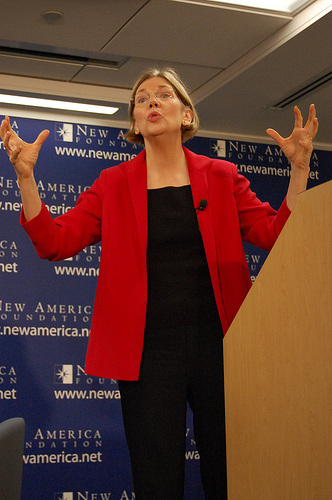 On Thursday, the Consumer Financial Protection Bureau will officially open for business, finally giving American consumers a standalone ally in the byzantine financial services industry. But since the bureau’s creation by the Dodd-Frank Act last summer, the CFPB has actually been working to help consumers for nearly a year.

A report released by the CFPB (PDF) on Monday outlines the bureau’s progress under Elizabeth Warren, the Harvard law professor who conceived of the bureau and was charged with getting it up and running. Warren wasn’t nominated to serve as the bureau’s permanent director—on Sunday President Obama tapped former Ohio attorney general Richard Cordray, who runs the CFPB’s enforcement division, for the position—but the bureau has her fingerprints all over it.

Under Warren, the CFPB has grown to 500 staffers from all corners of the financial world—banks, the Fed, academia, and so on. The CFPB has also opened its doors to supporters, critics, and constituents alike, meeting with community bankers from 50 states as well as a host of advocates, trade groups, and the top brass in the banking industry. The bureau has also cut agreements with other federal agencies to streamline the regulation process and better marshal its clout to help consumers. Here’s a snapshot of the bureau’s accomplishments so far:

Know Before You Owe Project: The CFPB has begun implementing a process for combining the complex and duplicative Truth in Lending Act and Good Faith Estimate mortgage disclosure forms into a single, useable form. By sharing early drafts of the new form with the public and integrating comments and insights into subsequent versions, we will begin the formal rule-writing process with the most effective form possible.

CARD Act Conference: In February, the CFPB hosted a conference on the one-year anniversary of the implementation of key provisions of the CARD Act. The conference was held to develop data about the impact of the new law and to initiate a candid conversation with industry participants about credit card markets.

21st-Century Technology: As the country’s first 21st-century consumer protection agency, the CFPB is reaching out to the public using 21st-century tools. This effort began with the unveiling of the Bureau’s website, ConsumerFinance.gov, the “Open for Suggestions” campaign, a Facebook page, a Twitter stream, Flickr and YouTube channels, and the launch of an easy-to-use jobs page for prospective employees.

Nonbank Supervision: Before the CFPB can supervise certain types of nonbank providers of consumer financial products or services, it is required by law to define who is a “larger participant” in certain markets. The agency has engaged the public early in the process, prior to initiating formal rule-writing, to build a strong foundation that takes into account a broad spectrum of viewpoints.

The CFPB’s launch on Thursday won’t be without problems—the Senate has yet to confirm a director to run the bureau. By not picking Warren, the president signaled that he didn’t want to pick a fight with the GOP on this issue. But Senate Republicans have said they will block Cordray anyway—at least until the bureau’s leadership is weakened from a single director to an SEC-style commission. That means the bureau will open without a leader and will likely be without one for the near future.