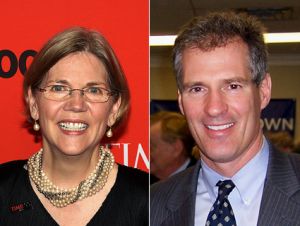 Public Policy Polling’s Ton Jensen tweeted on Tuesday morning that his new poll of the Massachusetts Senate race was the “most surprising Senate poll we’ve done since we found [the Republican, now-Sen. Scott] Brown up on [the losing Dem candidate, Martha] Coakley.” Whether the poll lived up to the hype is up for debate (it would be a pretty boring debate), but the results are pretty jarring: Democrat Elizabeth Warren, the Wall Street watchdog and Harvard professor who entered the race last week, leads GOP Sen. Scott Brown 46–44. To put it in perspective, when PPP last polled the race in June, Warren trailed Brown by 15 points.

Courtesy of Public Policy PollingThat’s a pretty big swing when you consider that a.) Warren has only just started campaigning, and b.) Brown remains fairly popular in the Bay State—and significantly more popular than the national GOP. What’s just as striking is the breakdown when Brown is pitted against Warren’s Democratic rivals for the nomination (she currently has four). Brown leads every other Democrat by at least 10 points.

We’re still more than 13 months away from election day, so the usual disclaimer applies: everything could change. But barring some sort of catastrophic gaffe—say, Warren deciding to shake hands in the cold at Fenway Park in a John Lackey jersey—this is shaping into the marquee Senate race of 2012. And Warren has come a long way from the days when time said she’d rather stab herself in the eye than move to Capitol Hill.