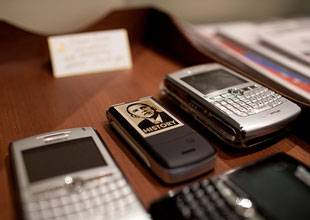 The Obama administration and two nonprofits have reached a wide-ranging settlement in their legal battle over millions of missing Bush-era White House emails, the three parties announced Monday. The agreement—first reported by Mother Jones on Friday—is a major victory for the plaintiffs, who sued in October 2007 to force the recovery of missing messages, determine how emails were lost, and prevent the problem from happening again.

Under the settlement with Citizens for Responsibility and Ethics in Washington (CREW) and the National Security Archive, the Obama administration has promised to restore 94 days worth of emails. Some of the recovered messages could potentially shed light on controversies such as the lead-up to the Iraq war and the leak of Valerie Plame Wilson’s covert CIA identity.

“Once the Obama administration figured out what a mess had been left behind in the server room, and that they didn’t want to be protecting the last administration’s bad practices, that helped them get to where they are now,” says Meredith Fuchs, the general counsel for the National Security archive.

In perhaps the biggest win for the plaintiffs, the restoration effort will not be limited solely to the records that were the subject of the lawsuit. The Obama administration has offered to recover presidential records—including those from the office of former Vice President Dick Cheney—that the court had ruled the plaintiffs had no legal standing to sue over.

The restoration project is limited by funding constraints. The Obama and Bush administrations have already spent over $10 million trying to restore missing emails—significantly more than the $5.2 million that Congress originally appropriated for the task. Still, the settlement requires the White House to restore 33 days selected by the plaintiffs, including the timeframe September 30 through October 5, 2003. This period is significant because email messages sent and received on those days were the subject of a subpoena by Patrick Fitzgerald, the special prosecutor in the Plame leak case. Although the Bush White House knew of email archiving problems as early as February 2004, evidence of the problem didn’t become obvious outside of the White House until the administration told Fitzgerald that it couldn’t locate any emails from the Office of the Vice President on those days.

In addition to this time frame, the White House is restoring 21 days that it has identified as having suspiciously low numbers of archived emails. Forty randomly selected “sample” days are also targeted. If significant numbers of emails are recovered from the “sample” days, that could conceivably prompt Congress to appropriate the millions of additional dollars it would cost to do a complete restoration of the entire 32-month period (March 2003 to October 2005) that was the subject of the lawsuit.

Emails sent and received on days that are not part of the current recovery agreement now could theoretically be recovered in the future. In January, the Bush administration transferred nearly 100,000 backup tapes—snapshots of the White House computer system at certain points in time—to the National Archives. So in 2014, when the emails in question can be requested under the Freedom of Information Act, transparency advocates could seek further restoration from the backup tapes. As of 2021, however, the National Archives may begin a process to dispose of the tapes.