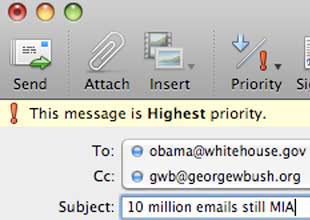 The years-long legal battle over millions of missing White House emails from George W. Bush’s presidency may finally be drawing to a close. “We are very close to a final settlement,” Anne Weismann, chief counsel for the watchdog group Citizens for Responsibility and Ethics in Washington (CREW), tells Mother Jones. “We have been in negotiations with [the White House] for months, and I think they really want out from under all this.”

CREW and another nonprofit, the National Security Archive, first sued the Bush administration in September of 2007, hoping to force the White House to recover missing emails and implement an effective archiving system that would prevent important presidential records from being lost or misplaced in the future. But the litigation has been on hold since March 2009, when the Obama administration and the plaintiffs jointly agreed to pursue a settlement.

Details of the agreement are still being finalized, but Weismann says CREW expects to prevail in the three areas that are most important to her organization: “restoration of missing emails, assurances going forward that the White House has an appropriate and effective electronic record-keeping system, and information about what happened.” (The White House and Justice Department did not immediately respond to a request for comment.)

Restoration of missing emails promises to be the trickiest part of the settlement agreement. The White House first ran into archiving problems in 2003, but didn’t begin to address the problem until October 2005. Only in the final days of the Bush administration did the White House begin working with contractors—including software giant Microsoft—to find missing messages. The emails could potentially shed light on a range of historic events and nagging controversies, including details about the lead-up to the Iraq war and the leak of Valerie Plame Wilson’s covert CIA identity.

The White House said earlier this year that between 10 and 20 million emails have been recovered that were either mislabeled or lost. Some of the emails were resurrected from backup tapes covering days when White House analysts believed there were suspiciously low counts of archived emails, indicating that messages were not being captured. (In January, the administration transferred nearly 100,000 backup tapes to the National Archives.) Many of the emails in question can be requested under the Freedom of Information Act beginning in 2014, five years after the close of the Bush administration.

The final settlement of the emails case would be another major victory for transparency advocates and one more concrete step the Obama administration has taken to live up to its pledge of improving government accountability. In late November, the White House agreed to release most of its visitor logs on a regular basis—an unprecedented move. Earlier this week, the Office of Management and Budget released a new government-wide open government directive, complete with tough, verifiable deadlines for agencies to improve transparency. Before the end of the month, the administration may also release a new declassification policy that focuses on openness.