While Kevin Drum is focused on getting better, we’ve invited some of the remarkable writers and thinkers who have traded links and ideas with him from Blogosphere 1.0 to this day to contribute posts and keep the conversation going. Today we’re honored to present a post from Andrew Sprung.

One thing I’ve always appreciated about Kevin is that his commitment to economic justice is grounded in political realism. That balance was on display in his postmortem on the Democrats’ drubbing in November:

[W]hen the economy stagnates and life gets harder, people get meaner. That’s just human nature. And the economy has been stagnating for the working class for well over a decade—and then practically collapsing ever since 2008.

So who does the WWC [white working class] take out its anger on? Largely, the answer is the poor. In particular, the undeserving poor. Liberals may hate this distinction, but it doesn’t matter if we hate it. Lots of ordinary people make this distinction as a matter of simple common sense, and the WWC makes it more than any. That’s because they’re closer to it. For them, the poor aren’t merely a set of statistics or a cause to be championed. They’re the folks next door who don’t do a lick of work but somehow keep getting government checks paid for by their tax dollars. For a lot of members of the WWC, this is personal in a way it just isn’t for the kind of people who read this blog.

This is a big problem because these are all things that benefit the poor but barely touch the working class.

As Kevin acknowledges, this is an age-old problem for Democrats. It’s “unfair” in that there’s overwhelming evidence that safety-net programs like food stamps, Medicaid and the Earned Income Tax Credit “have positive effects on health, educational attainment, earnings and employment years later,” as Jared Bernstein recently wrote.

There’s no denying the perception that Kevin fingers is a political force, and it’s one partly grounded in reality, in that safety net programs (for the non-elderly at least) do most directly benefit those at the bottom of the income distribution.

The Affordable Care Act is a really stark exemplar of this good policy/tough politics conundrum. For almost its entire life its approval ratings have been underwater, pulled down in part by low marks from working class Americans. Most of the Affordable Care Act ‘s supporters assume that the law has remained unpopular because, as Jonathan Chait put it, “[Republicans’] lies got halfway around the world before the truth could get its pants on.” And that’s largely true. But it’s also true that its impact on Americans’ incomes look something like this: 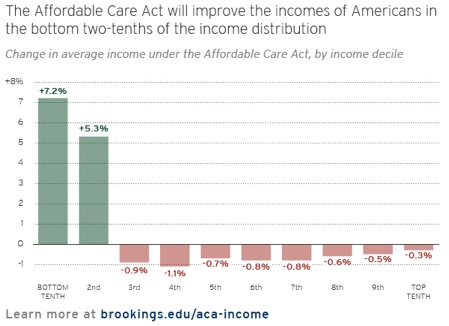 That chart is a very simplified takeaway from a study by Brookings economists Henry Aaron and Gary Burtless, one that starkly illustrates whom the ACA spends money on via premium subsidies and Medicaid benefits. It’s the bottom 20 percent of the income distribution.

Sliced another way, about half (48 percent) of private plan buyers in the 37 states using healthcare.gov had incomes ranging from 150 to 300 percent FPL, a more or less working class range. But more than half of those were at the lower end, 150 to 200 percent FPL.

The truth is, the ACA private plan market works best for people with incomes under 200 percent FPL. That’s the cutoff point for the beefy if little-known cost-sharing subsidies that reduce deductibles and copays and make the coverage comparable to (or, for those under 150 percent FPL, better than) that offered by high-quality employer-sponsored policies. A recent study by Avalere Health showed that people with lower-incomes who qualify for such subsidies are snatching up private plans from ACA exchanges—but uninsured buyers at higher income levels haven’t been nearly as enthusiastic. It would be great if more generous subsidies could make the exchange plans more attractive to those relatively better-off Americans on the upper end of the scale, but Democrats allocated what the political traffic would bear.

A genuine long-term bend in the healthcare cost curve would be worth all the Bowles-Simpson-type spending cut/tax hike plans ever conceived.

So how do the ACA’s offerings to the uninsured benefit the working class, white or otherwise? For starters, 200 percent of FPL, the upper end of the sweet spot for ACA benefits, is a working class income; it’s just under $40,000 for a family of three, and about two-thirds of median income. According to the Kaiser Family Foundation, 34 percent of Americans have incomes below that threshold.

But income in the U.S. is volatile. According to the economist Stephen J. Rose, in 2010, 7 to 8 percent of working-age U.S. adults were below the poverty line, but in the five years prior, about 18 percent spent at least one year in poverty. The same ratio may not hold for the 200 percent FPL level, but it seems fair to assume that half of U.S. households will fall below it at some point.

Pre-ACA, health insurance status was also highly volatile. A 2008 study by Mathematica Policy Research found that while nearly 18 percent of non-elderly adults were uninsured as of January 2001, 35 percent had been uninsured at some point over the three years prior. Of those, 60 percent went without coverage for at least a year. Extend the volatility caused by our employer-based health insurance system over a lifetime, and a very large percentage of Americans who don’t always live in poverty are likely to need an affordable fallback at some point.

There’s much more to be said (and studied) about how the ACA may benefit the working class and indeed all of us. The law will have multiple positive and negative impacts on employer-sponsored insurance, on the way care is organized and paid for, on hospital consolidation, Medicare, and so on.

Meanwhile, Republicans will continue to hammer Democrats over every real and perceived negative effect. (Watch out for that in 2018, when the most generous employer plans will be subject to the so-called Cadillac Tax, which could spur cuts to some workers’ coverage). And it’s not at all clear that Democrats will get much credit for some of the law’s biggest upsides.

In the longest view, if the ACA really is contributing to a long-term slowdown in the growth of US healthcare spending—admittedly a big ‘if,’ though the data is promising—it could secure the nation’s fiscal future and be a boon to everyone, poor or not. As Peter Orzag kept telling us back in 2009, “healthcare reform is entitlement reform.” A genuine long-term bend in the healthcare cost curve would be worth all the Bowles-Simpson-type spending cut/tax hike plans ever conceived.

At the same time, the ACA has already cut the ranks of the uninsured by 15 million, reducing the uninsured rate among non-elderly adults from 17.6 percent to 10.1 percent, as estimated in a just-published Urban Institute study. In states that accepted the Medicaid expansion, it’s cut the uninsured rate of the poor in half. For the middle class—very broadly defined by Urban as those in households between 138 percent and 400 percent FPL—it’s raised the insured rate by 7.6 percentage points.

That’s a monumental accomplishment, and Democrats paid for it in political blood. We should honor them for that.