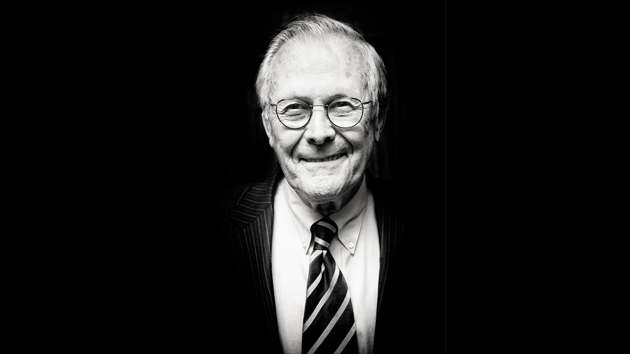 Not too long into Errol Morris’ new documentary on Donald Rumsfeld, The Unknown Known, the viewer learns almost all he or she needs to know about the former defense secretary who helped President George W. Bush lead the nation into war in Iraq. After a short recap of the initial US military action in Afghanistan following the horrific September 11 attacks, Morris notes that a “confusion” set in, with many Americans believing Saddam Hussein, the Iraqi dictator, was involved in 9/11. Morris puts this to Rumsfeld during the Q&A that makes up the spine of the film. Rumsfeld, in his familiar know-it-all way, dismisses the premise: “I don’t think the American people were confused about that.” Morris, who is not on screen, counters by citing a 2003 poll showing that 69 percent of Americans said it was “likely” that Saddam Hussein was personally involved in the assault. Rumsfeld responds, “I don’t remember anyone in the Bush administration saying anything like that, nor do I recall anyone believing that.”

Really? Rumsfeld is not acknowledging a known known. Within hours of the Al Qaeda attack, according to now-public memos, Rumsfeld was asking if Saddam Hussein could be hit in response, and for weeks afterward, Paul Wolfowitz, the deputy secretary of defense, repeatedly said during administration meetings that the Iraqi leader might have been behind the 9/11 plot. As Michael Isikoff and I noted in Hubris: The Inside Story of Spin, Scandal, and the Selling of the Iraq War, Wolfowitz sent memos to Rumsfeld asserting that Saddam may have played a critical role.

Morris doesn’t cover any of this, but he exposes Rumsfeld in a different and effective way—with Rumsfeld’s own words. Immediately after Rumsfeld tells Morris he has no clue how any American got the impression Saddam was tied to 9/11, Morris inserts video from a Rumsfeld press conference at the Pentagon in early February 2003. Saddam had recently declared that he possessed no weapons of mass destruction and had no relationship with Al Qaeda. A reporter asks Rumsfeld to respond. “Abraham Lincoln was short,” Rumsfeld says curtly—and no more. The reporter, not satisfied with this all-too-cute answer, presses Rumsfeld for more, and the secretary obliges: “How does one respond to that? It’s a continuous pattern. It’s the local liar…He almost never, rarely tells the truth.”

With this response, Rumsfeld was certainly bolstering the notion that Saddam was part of the 9/11 scheme. Yet now he plays dumb. And, thus, nothing else he says in the documentary can be taken at face value. This is a fellow who either is not as smart as he thinks or not perceptive enough to handle the hard truths.

Of course, after the invasion of Iraq—which Rumsfeld had sold on false pretenses—it was clear that Rumsfeld and the rest of the Bush-Cheney crew had failed to prepare adequately for the occupation, in what was one of the dumbest moves in US military history. In this film, Rumsfeld hardly comes to terms with all that. (Ditto the 100,000-plus civilian Iraqi deaths caused by the war—though he does choke up while talking about one American soldier wounded in Iraq who pulled through.) That’s no surprise. Neither is Rumsfeld’s cocky attitude—which was often on full display during his matinee press conferences at the Pentagon. Yet throughout the engaging film, Rumsfeld, as he did during his decades in government, hides behind a creepy sort of profundity. At one point, Morris cites Rumsfeld’s belief in the notion that “if you wish for peace, prepare for war” and notes that “you can use that to justify anything.” Rumsfeld responds by citing one of his “Rumsfeld rules”: “All generalizations are false—including this one.” He then offers a thin smile, chuckles, and adds, “There it is.”

Yes, the zen of Donald Rumsfeld, which is merely camouflage for stupid mistakes that caused mayhem and death. That much is certainly known.