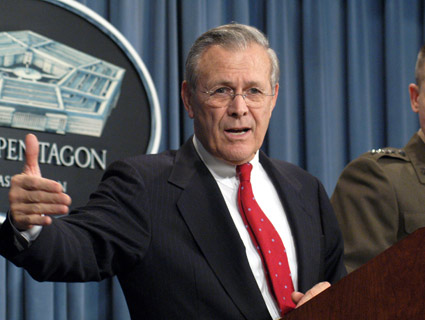 In the book, Rumsfeld claims that he should have referred to “suspect sites.” But, he says, his “few misstatements” were “not common and certainly not characteristic.” The intelligence at time regarding Iraq’s WMDS, he writes now, was strong. Yet he cites a note he wrote to himself in August 2002 that the intel “could be wrong”—as if to demonstrate his prescience and open-mindedness. And he insists in the book that Saddam Hussein’s purported (but nonexistent) WMD stockpile was “only one of the many reasons for the war.”

Rumsfeld is engaging in revisionism on these fronts. His incorrect statements about Iraq’s WMDs were quite common. Even though he may have thought the intelligence could be wrong, he repeatedly declared in public there was no possibility Saddam was not neck-deep in WMDs. And he often said the reason for the war were Saddam’s weapons of mass destruction. So, as a public service, here is a partial list of the many Rumsfeld “misstatements” that he does not address in his 813-page memoir.

Question: What do you make of the statement made by the Iraqi government yesterday that Iraq has no weapons of mass destruction and is not developing any?

Rumsfeld: They are lying. Next.

Question: When you say that Iraq is lying. That story mentioned having weapons—

Rumsfeld: Sometimes I understate for emphasis….

Question: It was a two part thing, that were not developing and that they did not have any. Were they lying about one, or both?

Rumsfeld: No. They have them and they continue to develop them and they have weaponized chemical weapons, we know that. They’ve had an active program to develop nuclear weapons. It’s also clear that they are actively developing biological weapons. I don’t know what other kinds of weapons would fall under the rubric of weapons of mass destruction, but if there are more, I suspect they’re working on them as well, even though I don’t happen to know what they are. It is just false, not true, inaccurate and typical.

“There’s no debate in the world as to whether they have those weapons.”

Rumsfeld: They have chemical weapons and biological weapons and they have an appetite for nuclear weapons and have been working on them for a good many years, and that there’s an awful lot we don’t know about their programs.

“The big thing that was there was the weapon of mass destruction issue, and [Saddam Hussein] had agreed, and the UN had agreed, that he would not have a WMD program. We know he does have one and he is continuing it.”

“There’s no debate in the world as to whether they have those weapons… We all know that. A trained ape knows that.”

“There is no doubt in my mind but they currently have chemical and biological weapons.”

“His regime has the design for a nuclear weapon; it was working on several different methods of enriching uranium, and recently was discovered seeking significant quantities of uranium from Africa.”

Al Jazeera: I would like to put it to you straight away the issue between you, the Bush administration, and Iraq is not weapons of mass destruction. It is for you—how to get rid of Saddam Hussein and his regime.

Rumsfeld: Well, wrong. It is about weapons of mass destruction. It is unquestionably about that.

“[Saddam Hussein] claims to have no chemical or biological weapons, yet we know he continues to hide biological and chemical weapons, moving them to different locations as often as every 12 to 24 hours, and placing them in residential neighborhoods.”

“We have a serious task before us, and it is to remove that regime and find the weapons of mass destruction, and replace it with a government that does not want those weapons.”

“Our goal is to defend the American people, and to eliminate Iraq’s weapons of mass destruction, and to liberate the Iraqi people.”

“We’re there to eliminate the weapons of mass destruction in that country.”

“I don’t think we’ll discover anything myself. I think what will happen is we’ll discover people who will tell us where to go find it. It is not like a treasure hunt where you just run around looking everywhere hoping you find something. I just don’t think that’s going to happen. The inspectors didn’t find anything, and I doubt that we will.”

Rumsfeld repeatedly said the war was about WMDs. He repeatedly said there was no question about Saddam’s possession of WMDs. (Ask that trained ape kept in the Pentagon’s basement.) He said he knew where the WMDs were and that Iraq was moving the biological and chemical weapons it possessed every 12 to 24 hours. Yet many of his professed “known knowns” turned out to be dead wrong. What’s unknown is whether Rumsfeld really expects anyone to accept his CYA account.