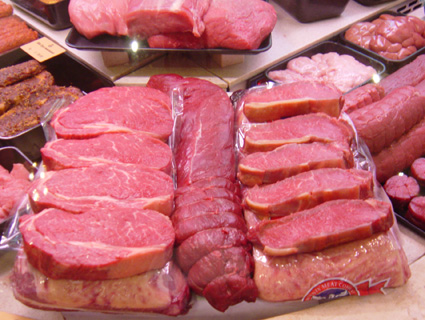 Every year, Americans eat 200 pounds of meat each—equal to a little more than two McDonald’s Quarter Pounders, per person, per day. That’s about twice the global average; but now the rest of the globe (led by China) is catching up fast.

Except it’s highly unlikely that Americans will be able to maintain anything close to current levels of carnivory by 2050, or that people in China, India, and other developing nations will be able to enjoy current US-style diets. There are a number of ways to reach this conclusion—for example, meat production is a massive generator of climate-changing gases—but here’s one that seems pretty fundamental: There just isn’t enough water.

The analysis showed that there will not be enough water available on current croplands to produce food for the expected population in 2050 if we follow current trends and changes towards diets common in Western nations.

The researchers found that industrialized nations currently get on average 20 percent of calories from animal protein (meat plus other products like milk and eggs). To produce the grain necessary to maintain that level and take it worldwide by 2050, farmers would need more usable water than the planet is capable of providing.

What level would work, according to the researchers? There will be “just enough water,” they conclude, “if the proportion of animal-based foods is limited to 5 percent of total calories.” In other words, we nonvegans need to prepare ourselves and our children for radically different diets in the coming decades—eating about a quarter of the meat, eggs, cheese, etc. we now do. Rather than relying heavily on animals for protein, we’ll have to learn to consume much more of what we now feed animals: legumes and grains.

For me, the good news is that diets rich in beans, grains, and vegetables, supplemented by animal products at the margins, can be quite delicious and healthy. Indeed, high-flavor, low-meat cooking is precisely the philosophy behind my occasional “Tom’s Kitchen” column. And the idea fits with my suspicion that at appropriately low levels, animals play a key role role in sustainable agriculture, for the simple reason that the most ecologically robust farming methods mimic natural systems. Managed carefully, ruminants like cows are capable of transforming grass that we can’t digest into highly nutritious meat and milk, while at the same time building organic matter in soil—just as bison have down on prairie lands for millennia. Hogs and chickens, kept on a small enough scale, can turn kitchen scraps and garden waste into meat, eggs (in the case of chickens), and powerful fertilizer. As the organic-farming pioneer Albert Howard has pointed out, “In Nature animals and plants lead an interlocked existence.” What’s not tenable are the vast animal factories that now dominate US livestock production—and increasingly, China‘s—and which would surely be needed on an even grander scale to provide the world with a US-style diet.

The bad news, though, is that there’s little reason to believe we’ll wean ourselves from over reliance on animal agriculture in any timely or orderly fashion. It’s true that per capita US meat consumption has dropped since the recession of 2008, but it remains well above global averages. Our meat industry, dominated by a few large companies, is politically powerful, and will resist any organized effort to reduce meat consumption. (See the US Department of Agriculture’s recent cave-in to industry pressure against an effort to promote “Meatless Monday” among USDA employees).

And our meat industry is rapidly expanding into developing countries, including China and India, and is all too happy to help satisfy rising demand for meat. All of this means that humanity will likely draw down water resources severely before we’re forced to cut way back on meat—causing massive environmental chaos, food price spikes, and hunger for the globe’s poor. Here’s how the investor Jeremy Grantham recently assessed the situation in the Financial Times:

Sadly, we are easily manipulated by vested interests, we passionately prefer good news to bad, we are more short-sighted than we think we are, and we are all too corruptible. The world is likely to act too slowly to conserve resources, improve farming technologies and discourage meat eating and waste, which accounts for between 30 and 40 per cent of all food from field to mouth. Our behaviour, which unnecessarily pushes up prices, will inadvertently cause malnutrition and outright starvation in poor countries.

That’s a gloomy vision, but the fact that it rings true shouldn’t drain us of hope. Across the globe, people are working on the ground to create ecologically sensible alternatives to the dominant farming model: diversified organic agriculture is booming in China and India, even as those nations’ governments promote industrialization and concentrated-animal feedlot operations (CAFOs); in Zambia and Malawi, farmers are using innovative cropping practices, not imported fertilizers, to increase yields of crops designed to be eaten directly by people, not animals. If scientists are correct that catastrophic droughts like this summer’s are bound to become increasingly common, policymakers worldwide might be forced sooner rather than later to enact policies that encourage those alternatives and ramp down our reliance on cheap meat at all costs.