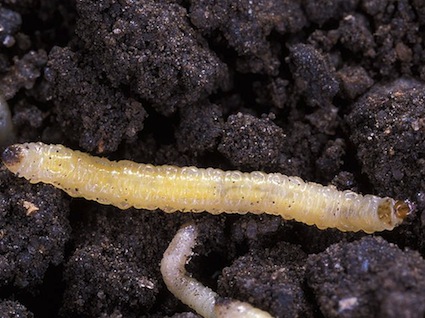 A western corn rootworm hunts for a corn root. <a href="http://commons.wikimedia.org/wiki/File:Diabrotica_virgifera_virgifera_larvae.jpg"> Center for Invasive Species and Ecosystem Health</a>/Wikimedia Commons

This summer, a severe drought and genetically modified crops are delivering a one-two punch to US crops.

Across the farm country, years of reliance on Monsanto’s Roundup Ready corn and soy seeds—engineered for resistance to Monsanto’s Roundup herbicide—have given rise to a veritable plague of Roundup-resistant weeds. Meanwhile, Monsanto’s other blockbuster genetically modified trait—the toxic gene of the pesticidal bacteria Bt—is also beginning to lose effectiveness, imperiling crops even as they’re already bedeviled by drought. Last year, I reported on Bt-resistant western rootworms munching on Bt-engineered corn in isolated counties in Minnesota, Iowa, and Illinois.

This summer, resistant rootworms are back like the next installment of a superhero blockbuster movie franchise. In a July 30 post, University of Minnesota extension agents Ken Ostlie and Bruce Potter report they’ve seen a “major [geographical] expansion” of rootworm damage throughout southern Minnesota, where Monsanto’s corn is common. The severe drought, they add, has “masked” the problem, because rainstorms typically make rootworm-damaged corn plants fall over, and rainstorms haven’t come this year.

Drought plus a plague of rootworms presents a compounded problem to farmers: The bugs tend to thrive under dry conditions, and the damage their incessant root munching does to plants above ground, like stunting their growth, is “magnified” by lack of water and heat stress, Ostlie and Potter add.

Potter told them [the workshop’s 100 attendees] the genetically modified corn is basically backfiring. “Instead of making things easier, we’ve just made corn rootworm management harder and a heck of a lot more expensive,” Potter said.

Here’s how Steil describes the interaction between drought and rootworms:

In fields with a rootworm problem, the bug damages the cornstalk’s ability to absorb water just when it’s needed most. With the roots weakened, the plant can also be more vulnerable to wind.

The Minnesota outbreak isn’t the first sighting of rootworms rampaging through Bt corn country this growing season. Back in June, University of Illinois entomologist Michael Gray reported that “The western corn rootworm ‘season’ is underway at a pace earlier than I have experienced since I began studying this versatile insect as a graduate student in the late 1970s.”

“In response to a request by a seed industry representative,” Gray writes, he traveled to a county in west-central Illinois county to “verify a report of severe injury to Bt corn that expresses the Cry3Bb1 protein targeted against corn rootworms.” When Gray reached the site, he found himself “amazed at the number of western corn rootworm adults in the whorls of plants.” He also found “severe” damage at the roots. Gray doesn’t name the company that the seed industry rep worked for, but the Cry3Bb1 protein, which is supposed to kill corn rootworms, is owned by Monsanto. To summarize, rootworms were enjoying an all-you-can-eat buffet on the very corn that Monsanto had engineered to kill them.

Puzzlingly, Gray declines to conclude that the spectacle he witnessed means that the ravenous rootworms had developed resistance to Monsanto’s seeds.

This does not mean that a resistant western corn rootworm population has been confirmed in Illinois. The registrant of this technology [i.e., Monsanto] has been notified and will conduct some follow-up investigations in these fields. So, at this point, precise reasons for the continuing performance challenges of some Bt hybrids expressing this protein remain elusive. However, producers should remain vigilant and report any performance issues that surface with their Bt hybrids regarding corn rootworm injury this growing season. [Emphasis in original.]

And what’s Monsanto’s reaction to all of this? Last year, as corn stalks fell over, their roots devastated by the pests, their plight documented in at least one academic paper and confirmed in a blunt EPA report, Monsanto flatly denied the resistance problem. Apparently, it’s maintaining that stance. Here’s Minnesota Public Radio’s Steil:

Monsanto is studying the problem, but so far the company has found no definitive proof that the rootworm has built up resistance to its corn. Company officials say what’s being seen in many fields may just be abnormally high rootworm populations that overwhelm even the deadly genetic weapon implanted in their modified corn. In a statement, Monsanto officials said the company collected rootworms from problem fields last summer. The company expects to finalize test results on the bugs this fall. Those results may show whether the rootworms have developed resistance.

While the company peddles such flimflam, its ubiquitous products are making US crops more, not less, vulnerable to drought during the worst dry spell in a generation, at a time when scientists are predicting more-frequent severe weather events as climate change proceeds apace.