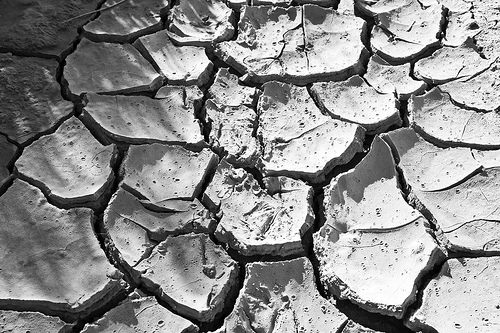 What caused the vast power grid failure that roiled India this week? Precise causes remain unknown, but one emerging explanation points a finger at the nation’s severe drought. Here’s the New York Times:

Part of the reason may be that low rainfall totals have restricted the amount of power delivered by hydroelectric dams, which India relies on for much of its power needs. Another cause may be that drought-stricken farmers are using more power than expected to run water pumps to irrigate their crops.

That’s a drought-related double whammy: Low rainfall crimps energy supply because of its effect on hydropower, and jacks up demand by forcing farmers to irrigate more.

NPR’s coverage of the outage also pointed to drought:

The electricity shortage has been made worse by a failure of this year’s rains that’s forced vast numbers of India’s farmers to use electric pumps to draw well water to irrigate their crops.

The drought link brings to mind the question of climate change. The summer marks the third straight of delayed or outright failed monsoons. Is a warming climate causing India’s monsoons to fail? The Economist recently looked at the question. The magazine found that it’s impossible to say, because “India is short of observation stations, weather planes, satellites, climate scientists and modellers.” Moreover, “even with better data, monsoons are ill-understood once they leave the sea or low-lying land.”

But The Economist finds little doubt that climate change is affecting India:

One trend looks clear: India has grown warmer over the past six decades. Glaciers are melting in the Himalayas, and orchards in the range’s valleys are being planted on ever-higher slopes in search of a temperate climate. Crops in the northern grain belt, notably wheat, are near their maximum tolerance to heat, and so are vulnerable to short-term blasts of higher temperatures.

And extreme weather events like the current one can be expected to happen more often as climate change proceeds apace:

Experts who met in Delhi in May to discuss climate-induced “extreme events” in India suggest that likelier threats include more short and devastating downpours and storms, more frequent floods and droughts, longer consecutive dry days within monsoons, more rapid drying of the soil as the land heats, and a greater likelihood that plant and animal diseases might spread.

As in the United States, the switch to industrial agriculture in great swaths of India’s most productive farmland have made the nation more, not less, vulnerable to drought. In the 1960s, Indian farmers in Punjab state, the nation’s breadbasket, participated in a US foundation-funded “Green Revolution” to modernize agriculture after the US model, relying on huge irrigation projects and hybrid seeds requiring large doses of fertilizer and pesticide. (Here’s my review of an excellent recent book on the Green Revolution.) By the late 2000s, overirrigation had severely depleted Punjab’s water table, the New York Times reported. Here’s how NPR described the situation in a 2009 report:

Their comparatively small region, Punjab, grows far more wheat and rice for India than any other region. But now these farmers are running out of groundwater. They have to buy three times as much fertilizer as they did 30 years ago to grow the same amount of crops. They blitz their crops with pesticides, but insects have become so resistant that they still often destroy large portions of crops.

Add to that volatile mix a severe drought, and you get farmers using electric generators to frantically pump water from wells—and severe pressure on the electric grid.

I should also note that the links that bind climate change, drought, farming, and energy production don’t just affect India. The United States, too, is in the midst of a crippling, crop-destroying drought. An eye-opening recent NYT op-ed by University of Texas professor Michael E. Webber pointed out that “about half of the nation’s water withdrawals every day are just for cooling power plants,” adding that “all told, we withdraw more water for the energy sector than for agriculture.”

Webber reports that “in the Midwest, power plants are competing for water that farmers want for their devastated corn crops.” And previous droughts have pushed our own energy grids to the brink of failure—and the current one may be, too:

During the 2008 drought in the Southeast, power plants were within days or weeks of shutting down because of limited water supplies. In Texas today, some cities are forbidding the use of municipal water for hydraulic fracturing. The multiyear drought in the West has lowered the snowpack and water levels behind dams, reducing their power output. The United States Energy Information Administration recently issued an alert that the drought was likely to exacerbate challenges to California’s electric power market this summer, with higher risks of reliability problems and scarcity-driven price increases.

Kind of makes you wish that climate change could draw the attention of Congress and the president, doesn’t it?