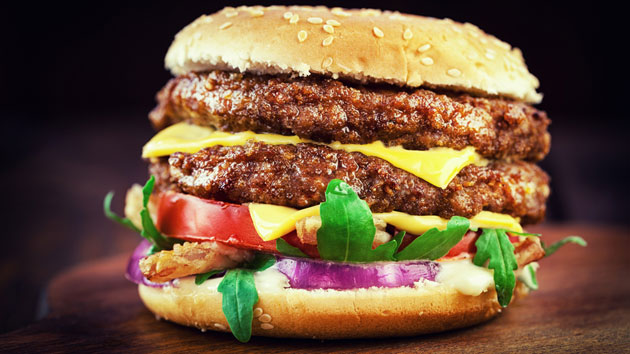 This year will be the highest for meat consumption since 2006. Shutterstock/KP PhotoStudio

While the Dutch and other nations are advising consumers to cut down on red meat, it’s estimated that Americans will eat more beef this year than we have in the last decade.

The Netherlands Nutrition Centre’s new dietary guidelines suggest eating no more than 500 grams (just over one pound) of meat per week, including no more than 300 grams (0.7 pounds) of red meat, which it describes as “high carbon.” The agency wants the Dutch to scale back red meat for health reasons and sustainability. After all, the meat industry produces 14.5 percent of anthropogenic greenhouse gas emissions and land for grazing takes up a quarter of the Earth’s non-ice surface. The Dutch agency’s new guidelines also decrease the recommended fish consumption from twice to once per week, and they encourage protein from sources such as unsalted nuts and legumes.

In the United States, on the other hand, diners are piling more meat onto their plates. The USDA has predicted that 2016 will be the biggest year in a decade in Americans’ consumption of beef. We’ll eat an estimated 53.4 pounds, nearly half a pound more per person than last year. 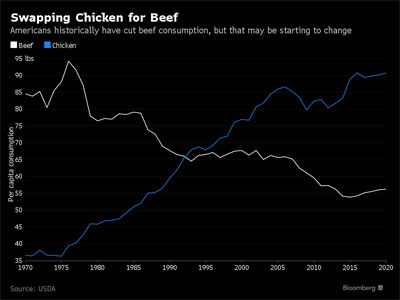 Bloomberg Business compares US chicken and beef consumption since the 1970’s. Source: Bloomberg

According to Bloomberg, the increase could be due to cheaper prices on red meat and the popularity of protein-heavy diets like the paleo diet. Also, there are more cows. Droughts that plagued the Southwest in 2014 meant fewer cows and higher beef prices. However, cattle counts from earlier this year show there are nearly 3.5 million more cows than two years ago.

The Dutch aren’t the only sustainability conscious eaters. Sweden altered its dietary guidelines in 2009, and in 2012 Brazil called for cultivating and eating foods that had “environmental integrity.” Last week, the United Kingdom released its EatWell Guide, which advised Brits to eat less red meat.

It’s unclear whether the USDA will change its guidelines to reflect sustainability any time soon. When “My Plate,” the Obama administration’s food group 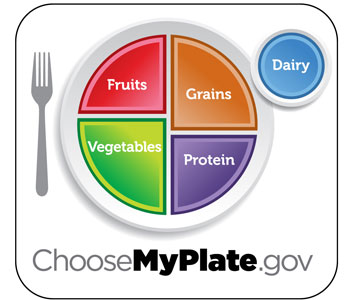 The USDA’s “My Plate” guidelines were released in January. The guidelines advised more vegetables, fruits and lean meats, and less sugar. Source: ChooseMyPlate.gov

recommendations, came out earlier this year the government played it safe and only mentioned eating leaner meats. The guidelines instead came down hard on limiting sugar intake.