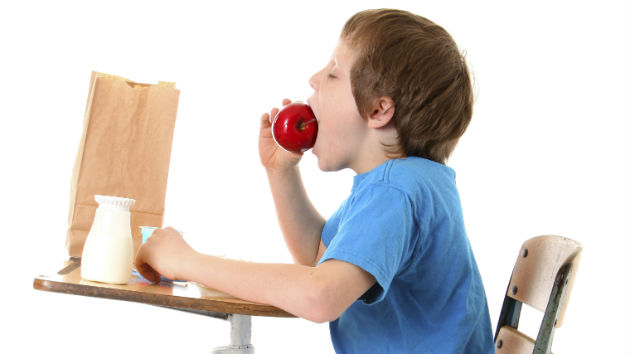 Who decides what kids eat at school? The answer is complicated, but one big piece of the puzzle is the US dietary guidelines, the nutritional recommendations released by the federal government every five years. Last week, the Obama administration issued the long-awaited guidelines, urging Americans to cut down on sugar.

Many of us don’t pay much attention to the recommendations, but they guide the food served to millions of people through federal programs for women, children, the elderly, and other vulnerable populations. And overall, they’ve remained relatively consistent for decades: Americans should eat more vegetables, whole grains, and fruits, and less saturated fat, sodium, and added sugars. The suggestion to cut back on sugar this year sticks out because it is so specific: Americans are supposed to limit added sugar to no more than 10 percent of total daily calories. (In the past edition, Americans were simply encouraged to “reduce the intake” of added sugars.) For an American on a 2,000 calorie diet, 10 percent means no more than 12 teaspoons a day—a dramatic drop from the 30 teaspoons consumed by many Americans.

Here’s a comparison of how much added sugar the average American eats versus how much they should be eating, according to the most recent guidelines: 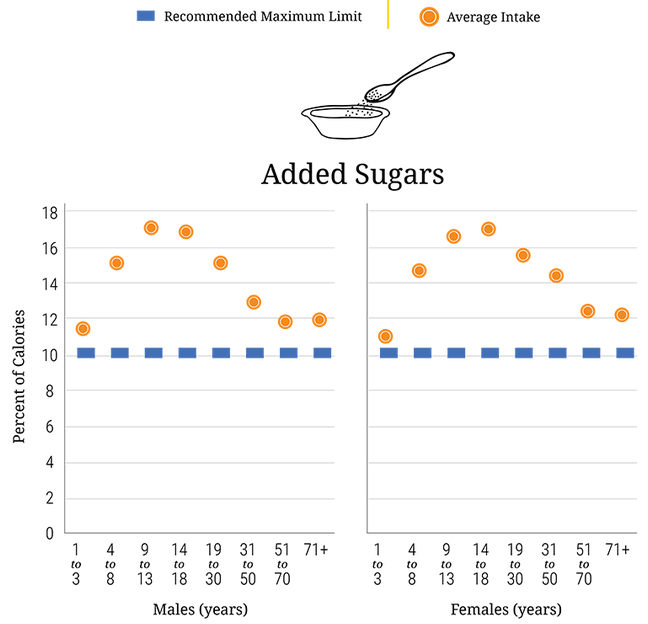 The guidelines call for a pretty dramatic change—so can we expect school cafeterias to do a major sugar purge? Not necessarily—at least not anytime soon.

For starters, senior officials with the US Department of Agriculture don’t expect the new guidelines to affect school lunches—no surprise, since sugar doesn’t tend to be a big problem for lunch. But school breakfast is a different story—think sugary cereal, flavored yogurt, and pastries. Waffles and pancakes often come prepared with added sugar so schools don’t have to deal with messy maple syrup dispensers. The result is that school breakfasts often contain more than half of the recommended daily amount of sugar—and yet, currently, there are no sugar standards for school meals, says Margo Wootan, director of nutrition policy at the Center for Science in the Public Interest.

“The cereal makers won’t want to reformulate for schools, and snack food companies—they’re not going to want to change.”

Snacks at schools can also be supersweet—foods compliant with the current federal standards include cereal bars, chocolate chip cookies, and frozen yogurt. There are sugar standards for school snacks, but they’re relatively weak—foods are supposed to be no more than 35 percent sugar by weight. (The typical sugary cereal bar is, by weight, about one-third sugar.)

But changing snacks and breakfasts so they align with the latest guidelines would likely take years—and such a change would be far from automatic. First, the USDA would need to issue rules requiring schools to comply with the dietary guidelines, and then schools would need to be given time to implement the changes. Timing is tricky, since, over the past five years schools have had to make dramatic changes to meals to comply with the Healthy Hunger-Free Kids Act—which was passed in 2010 but was not fully implemented until 2014. Many school nutrition directors weren’t great fans of those reforms—they resisted making meals healthier, claiming kids won’t eat more wholesome food.

What’s more, any changes to school food standards are sure to get significant pushback from the sugar lobby, which has already spent nearly $3 million on the upcoming elections—far more than other agricultural industries. The Sugar Association, the industry’s main trade group, released a statement last week calling the guidelines “agenda focused, not science focused.” And school food is big business for Big Sugar, says Wootan. “The cereal makers won’t want to reformulate for schools, and snack food companies—they’re not going to want to change.”