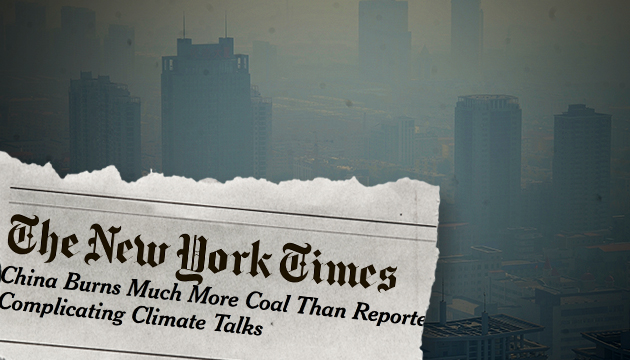 Photo by Tao Zhang/NurPhoto/Sipa via AP

A prominent global environmental organization is questioning one of the central claims in a splashy New York Times story today about China’s outsized carbon emissions, calling the report “old news.”

On Wednesday morning, the Times reported that the world’s biggest carbon polluter, China, had recently ratcheted up the amount of coal it says it burns every year by a staggering figure—17 percent more per year than the Chinese government had previously disclosed in official statistics. “The increase alone is greater than the whole German economy emits annually from fossil fuels,” the article reads.

One of the article’s conclusions is that these revisions could change the course of the upcoming UN climate talks in Paris: “Officials from around the world will have to come to grips with the new figures when they gather in Paris this month to negotiate an international framework for curtailing greenhouse-gas pollution.”

“Energy experts are very well familiar with the latest emissions information about China so this should not have any impact on the climate negotiations,” one analyst said.

But the World Resource Institute (WRI), and environmental monitoring, research and advocacy group, says UN officials are fully aware of the northward revisions of statistics by the Chinese government, and that the new numbers are included in the official UN documents used by negotiators. In other words, everyone is already on the same page—including analysts at WRI.

This information was first made public in February, 2015 by the Chinese government through a routine announcement of latest statistics, according to Ranping Song a climate policy analyst at WRI. “This is old news, not a new development,” he said in an emailed statement.

Song adds that he has direct confirmation from the UN Framework Convention on Climate Change secretariat, the body responsible for the Paris talks, that its most recent “synthesis report”—a document that outlines how much greenhouse gas pollution countries are willing to cut in the lead-up to Paris, released at the end of October—incorporates the most recent Chinese data.

Song says China is still “on track to meet and exceed” its stated climate goals: “Energy experts are very well familiar with the latest emissions information about China so this should not have any impact on the climate negotiations,” Song wrote in an email. “In fact, many experts are still confident that China will actually peak its emissions before China’s own target of 2030.”

In November 2014, the United States pledged to cut emissions by up to 28 percent by 2025, while China agreed that its emissions would peak around 2030, and promised to get one-fifth of its power from non-fossil-fuel energy sources by the same year.

The official statistical revisions of coal burning contained in the New York Times article were reported most publicly in the Western media as early as September this year (for example, in the Wall Street Journal)—when the US government came out with its own analysis stating that China was burning 14 percent more coal than previously thought, published by the Energy Information Administration (EIA).

EIA announces “extensive” revisions in China’s coal use and production. By a significant amount. All UPWARDS; pic.twitter.com/OUCtoBnHpm

Li Shuo, a Greenpeace analyst who tracks China’s climate policies, also says the revelations don’t amount to a game-changer. “My colleague wrote about it half a year ago,” he said, noting the New York Times’s results draw on “the same data.”

So how do we account for the difference between the EIA’s 14 percent, and the New York Times’s 17 percent rise? Li can’t say for sure, but he expects that the Times might be referring to a single year where the author saw the biggest discrepancy, whereas the EIA clearly refers to a period of time, from 2000 to 2013. We’ve reached out to the author, Chris Buckley, at The New York Times for clarification.

Update, Wednesday, Nov. 4, 10:30 p.m. EST: New York Times China correspondent Chris Buckley told me that the Chinese statistics made available in February were known only as a preliminary statistical “abstract.” So while the actual data has been public for some time, the fresh figures to which Buckley refers in his article, he says, “fleshes out in much greater detail the revisions flagged in the statistical abstract”, and there might be some “slight differences” between the preliminary abstract and the later, completely finalized data.

As to whether the new revisions scramble climate negotiators in the run up to Paris, Buckley acknowledges the Chinese likely had input into the latest UN synthesis report. But he says there are still questions and uncertainties to grapple with about how the upward adjustments translate into actual emissions. “The other point, too, is that making muted, conjectural adjustments in a background report is one thing; having explicit official and detailed confirmation from China that coal consumption has been greatly underestimated is another,” Buckley wrote.