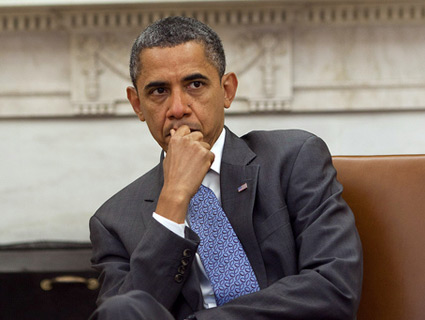 In his State of the Union address on January 24, President Obama largely avoided the topic of climate change. He talked about it once, in passing, as a topic on which “the differences in this chamber may be too deep” to enact new legislation. Its less-controversial cousin, “energy,” on the other hand, got a whopping 23 mentions as an area where Republicans and Democrats should be able to find agreement.

It became clear well before that address that the president and his administration don’t think that climate change is an issue that will carry them to a second term. In his public events following the speech, he’s also focused on clean energy while avoiding the other “c” word.

But there are several reasons that Obama won’t be able to avoid talking about climate change for too long—and well he shouldn’t. The first is the ongoing battle over the Keystone XL pipeline. The proposed 1,661-mile pipeline from Canada to Texas probably would have been approved to little fanfare if environmental groups hadn’t waged a lengthy campaign asking the White House to reject it. Similar pipelines hadn’t faced much backlash, but this one drew ire from climate-change activists who called attention to the increased emissions stemming from oil from Canada’s tar sands, and from local residents in the pipeline’s proposed pathway. During two weeks of sit-ins in late August, more than 1,200 people were arrested outside the White House protesting the pipeline. Activists also held a massive rally on November 6 that ended with thousands encircling the White House.

Obama first sought to avoid the Keystone controversy by putting off a decision until after the election. But Republicans in Congress forced his hand, inserting a provision into a December tax bill that required the administration to decide by February 21. And decide he did—to reject the permit application for the time being. While Republicans forced the definite answer, it was environmental groups that made him say “no.” This, they argue, should be an indication that climate is an important issue for Obama’s base and one they’ll turn out on.

“We’ve actually paved the way for the president to start talking about these issues in a much stronger way,” said Erich Pica, president of Friends of the Earth. FOE was one of the groups exerting pressure on the State Department and the White House to reject the pipeline. Not only were enviros able to they rally their own supporters against the pipeline, but they were able to reach out to broader audiences through coverage of the protests and participation in public comment sessions along the path of the pipeline, said Pica.

Author and environmental activist Bill McKibben, who led the Keystone work with the group 350.org, dinged other environmental groups for not talking about climate change, and thus not forcing the White House to push the issue. “For a long time, many groups driven by focus groups and polls have concluded it was easier to talk about ‘clean energy’ and ‘green jobs,'” said McKibben. “But our experience at 350.org is that you can engage the science very directly and build a big movement. Clearly it was concern about climate that drew a large percentage of the people who made up the Keystone fight.”

But it’s not just Keystone protesters that are concerned about climate change. The most recent polling from the Pew Research Center for the People and the Press found that 63 percent of Americans think there is “solid evidence” that the earth is getting warmer (though only 38 percent think it’s because of human activity). That also included 43 percent of people who identified as Republicans and 63 percent of independents.

Furthermore, it’s unlikely that Obama will be able to avoid the subject on the campaign trail—especially since the EPA is expected, any day now, to release new standards for greenhouse gas emissions that all new power plants in the US will have to abide by. (The rules were due out in January, but are now caught up in review at the White House Office of Management and Budget.) The new standards are “likely to spark unjustified outrage by conservatives, which will put it on the policy agenda regardless of whether or not people in the administration want it on that agenda,” said Dan Weiss, director of climate strategy at the Center for American Progress Action Fund. The Republican presidential candidate will probably make an issue of those rules, calling them anti-business and counterproductive to economic growth. Republicans will also harp on the administration’s previous support for a climate bill in Congress. So too will political action committees backed by oil and gas interests. All this will make climate change harder for the Obama campaign to avoid, which is all the more reason, advocates of climate action argue, that the administration should take a proactive approach to talking about what they’ve done.

“It’s hard to imagine it won’t be part of the conversation, whether they want it to or not,” said Weiss.