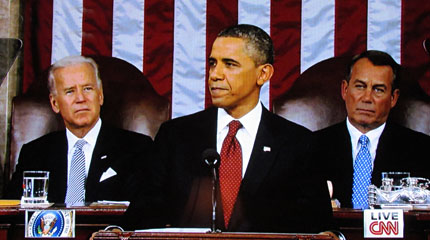 I know it’s a cliche to say that an election-year State of the Union address is a campaign speech on steroids, but tonight’s State of the Union address was…..a campaign speech on steroids. At one point or another, I think I heard a shout out to virtually every conceivable voting bloc in the nation. We need to double work study jobs, double our exports, double tax deductions for domestic jobs, double our trade complaints against China, and double down on clean energy. We need an all-of-the-above energy policy and an all-options-on-the-table policy against Iran. We salute the million soldiers who served in Iraq, we’re going to train two million Americans with new job skills, and we’re planning to develop enough clean energy to power three million homes. We’re going to save $10 billion in regulatory costs and $100 billion in energy costs. We’re going to cut the deficit by $2 trillion.

There was even a shout out to process wonks:

Some of what’s broken has to do with the way Congress does its business these days. A simple majority is no longer enough to get anything — even routine business — passed through the Senate. Neither party has been blameless in these tactics. Now both parties should put an end to it. For starters, I ask the Senate to pass a rule that all judicial and public service nominations receive a simple up or down vote within 90 days.

That’s not going to happen, but even a couple of sentences in the SOTU is more attention than this usually gets. Still, I wish Obama had explicitly stated that the Senate now requires 60 votes instead of 50 to pass legislation. If he’s going to pander to us process wonks, he should at least do it right.

I’m a Democrat and a fan of the president, but even I found this speech formulaic, devoid of interesting ideas, and built almost solely for applause lines. Presumably this means that it’s going to poll through the roof. Joe and Jane Sixpack will love it. And with that, Campaign 2012 has officially gotten underway.