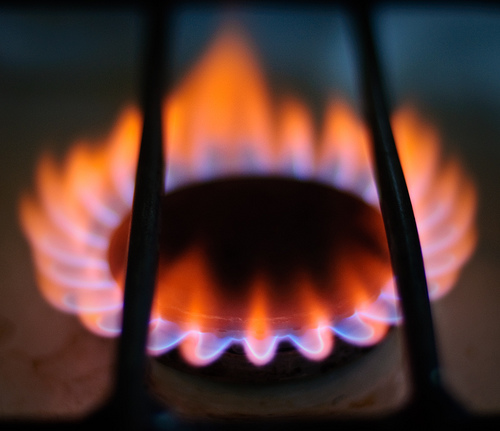 President Obama devoted a significant portion of his energy remarks in the State of the Union to natural gas development on Tuesday. He called for greater production of the 100-year supply here in the US, and pledged to take “every possible action” ensure that it is done safely.

“America will develop this resource without putting the health and safety of our citizens at risk,” he told the joint session of Congress. He has repeated his support for natural gas in multiple stops along his “America Built to Last” tour this week, which included a visit to a UPS facility in Nevada to tout a liquefied natural gas refueling station the company received stimulus money to build.

Leaving aside the concerns about safety related to fracking (and there are quite a few), the natural gas push raises a number of other questions about the longer-term safety and well-being of our citizens. For one, natural gas is still a fossil fuel. That means there’s a finite supply of it, and 100 years isn’t all that long, in the grand scheme of things. My (currently nonexistent) kids might still be alive then!

And then there’s the greenhouse gas issue. Yes, in some ways it’s cleaner than coal. Burning it releases less CO2, but it’s not emission-free. The process of extracting gas from shale also causes a good deal of methane leakage. Cornell University’s Robert Howarth, a professor in the department of ecology and evolutionary biology, released a paper last year that found it shale gas extraction is responsible for 20 percent more greenhouse gases than coal overall. Now he’s got a new paper coming out in the journal Climatic Change that reasserts his finding natural gas is actually be worse than coal, which the Inter Press Service covered this week:

However, those climate gains are more than negated by methane leaks both at the well during the fracking process (called flow-back), and through the gas delivery and distribution system. Howarth and colleagues estimate that between 3.6 and 7.9 percent of all shale gas produced leaks—called “fugitive emissions”—into the atmosphere, making it worse than burning coal or oil.

Methane has 105 times the warming potential of CO2 over a 20-year time frame, after which it rapidly loses its warming potential. If large amounts of methane are released through fracking—as seems likely with hundreds of thousands of new wells forecast in the next two decades—Howarth says global temperatures could rocket upward from 0.8C currently to 1.8C in 15 to 35 years, running the risk of triggering a tipping point that could lead to catastrophic climate change.

Anyway, this is all to say that the safety and environmental concerns related to shale gas extraction aren’t limited to fracking, and that the “cleanness” of this clean-energy solution isn’t entirely clear.