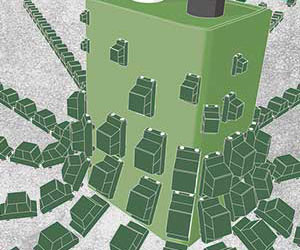 In a drab, cramped room at the back of Lee Hart’s basement, there is a faint and somewhat eerie hum. More than a hundred large, mostly rechargeable batteries from around the world rise along the walls and sprawl across the floor. A few are hooked to machines with quivering meter needles measuring the amount and durability of their charges; the data are being fed into a 1987 Zenith XT computer with dual floppy disks stationed on a table in the corner. There are the traditional lead-acid batteries of the sort used in most cars. There’s a stack of the nickel-metal-hydride batteries Hart salvaged from an EV1, the crushed vehicle that starred in the movie Who Killed the Electric Car? And there are the lighter, exponentially more expensive lithium-ion batteries.

Hart points to one of the latter—made in China, it’s known as the Thunder Sky—and declares, “That would be a wonderful battery if it met the specs claimed by the manufacturer, and some of them do. But that tested out at about half the specs. You put this in a [gas-powered] truck, it would be hard to notice. But if you have a stack of underperforming batteries in an electric car, it makes a difference.”

A connoisseur of batteries and a debunker of the so-called breakthroughs that come around like clockwork every couple of years, Hart makes it his business to parse hype from performance. Whenever he hears about a new battery, the 58-year-old self-employed electrical engineer (he did lab work at Eastman Kodak and Honeywell) writes the company and asks for a prototype to be sent to his home in Sartell, Minnesota. “I’m a cheapskate, and sometimes they’ll send me a free one,” he jokes. So far, he still prefers lead-acid batteries. Using a life-extending charging system he designed himself, he’s converting his third electric car to handle 14 of them; a buoyant pride creeps into his voice as he notes that most of the batteries are 8 to 10 years old. “Just like you don’t feed an old dog puppy chow,” he says, an old dog himself with the white tufts on the sides of his balding head combed up to resemble Mercury’s wings, “you treat old batteries differently.”

Hart has heard the dreamers wax on about a time when batteries will run for days on end, revolutionizing plug-in cars, windmills, and solar panels—just about any source of alternative energy would benefit from good batteries, which allow electricity to be stored and transported. He has sympathy for those visions. A motto of his hero, Thomas Edison, is inscribed on a favorite sweatshirt: “To invent you need a good imagination and a pile of junk.” Like most electro-geeks who’d rather tinker than strut, he also adheres to Edison’s practical DIY ethos, which explains the battery room and the small fleet of electric cars he has either retrofitted or built from scratch. His tests invariably reinforce what he and most everyone else familiar with the battery market have long known. When it comes to practical applications for sustainable energy, batteries are more of an Achilles’ heel than a panacea, because we are running 21st-century technology with what is essentially 18th- or 19th-century chemistry.

A rechargeable battery generally consists of metal electrodes and a highly conductive electrolyte—lead and acid being one example—that react to store a charge. Although crude battery designs date to before Christ, the modern battery prototype came about in the 1790s when Alessandro Volta made an electric circuit by stacking wired-together silver and zinc discs in salt water. While different pairings of metals and chemicals have been used to improve the power, durability, storage capacity, and safety of batteries, the way they function has remained the same.

At the turn of the 20th century, battery-powered cars were considered a formidable competitor to oil- and steam-powered vehicles. Hart points out that the first auto to reach a speed of 60 mph was a French electric in 1899, and his own love affair with electric cars began when he rode in a 1917 Detroit—a model with plush upholstery, rosewood trim, and little flower vases—at a trade show in the 1970s. But electric car companies, which geared their products to a high-income clientele, were soon undercut by the more affordable Model T’s coming off Ford’s assembly lines. Gasoline has been the world’s dominant transportation fuel ever since.

Now peak oil and global warming have thrust electric cars back into the spotlight. But there’s just one problem. While computer circuit boards double transistor capacity every two years (a principle dubbed Moore’s Law), battery technology has lagged far behind. Blame basic physics. “To get Moore’s Law out of battery improvements would be like expecting to make steel twice as strong but with half the density,” says Yet-Ming Chiang, a professor in the materials science and engineering department at MIT.

That doesn’t mean we can’t do incrementally better, says Chiang, who is also the cofounder of A123 Systems, a Massachusetts-based company that is on the cutting edge of battery technology, specifically with respect to lithium-ion chemistry and nanostructures (which increase the surface area of the metal and therefore extend its charge and boost its capability). Lithium-ions are lighter and hold longer charges than other types, but they are also more prone to burst into flames, a tiny, undesirable conflagration in a cell phone, but potentially fatal in a vehicle. The use of nanostructures has enabled A123 to safely put its lithium-ion batteries into power tools, a step forward. The company is also one of two developers chosen to test batteries in the Chevy Volt, an electric car General Motors claims will be mass marketed by 2010.

Powering a drill is a long way from running an automobile, however, and the current battery technology for all-electric cars would be hard-pressed to satisfy the public. The average American drives 40 miles or less per day, but market studies have shown that consumers want electric cars to be able to travel 100 to 200 miles between charges. Which brings us to another problem. “Right now, batteries with a 40-mile range are the size of a small suitcase and weigh 150 pounds,” Chiang says. “Imagine five times that to get to 200 miles.” And even if lighter lithium-ion batteries could be made safer, they’re prohibitively expensive.

The cause is far from hopeless. But some assistance—or simply lack of resistance—from the government and vested business interests is key. Hart says that the nickel-metal-hydride battery made in the 1990s by Ovonics that went into the EV1 was “as good as they claim,” capable of a 100-mile range. Had GM continued production, mass sales might have driven down the battery’s price. But, Hart notes with a shake of his head, Ovonics “sold the technology to Chevron, and they aren’t making them.”

While some engineers focus on interim steps—such as adding supercapacitors to lead-acid batteries in order to squeeze out more power—others continue to strive for that elusive revolutionary advance. “To get the technology from 40 miles up to 200 miles on a single charge and do it at a GM price point rather than a NASA price point is obviously going to require a degree of invention and innovation that we don’t have yet,” says Donald Sadoway, an MIT materials chemistry professor. “We need to discover new materials for electrodes and electrolytes that have greater storage capability and higher current capability.” A colleague of his is using computational models to figure out what chemicals could yield better results. “I’m confident we’ll see some major innovations come from this approach,” says Sadoway.

Another potentially revolutionary use for batteries involves the ongoing development of large-capacity models that utility companies can power up during off-peak hours at night and draw from during the day, supplementing the grid when power is needed most. For nearly a decade, utilities have been storing power in sodium-sulfur batteries that are the size of double-decker buses. Now they are looking to improve and expand the use of this technology to harness wind power, so that energy generated on blustery nights can be used the following day, or even the day after.

“We’ve looked at sodium-sulfur batteries, but we certainly aren’t married to one technology,” says Frank Novachek, director of corporate planning for Minnesota-based Xcel Energy, which sells more wind power than any utility in the country. “We plan to tie into a small wind farm in southwestern Minnesota, both to use the battery as if it were integral to the wind farm and to see how it does for electricity storage as a shock absorber on the system.”

The latest potential advance involves ceramic-battery chemistry being developed by EEStor, out of Cedar Park, Texas. The company’s grandiose claims—”10 times the energy density of lead acid batteries at 1/10th the weight and volume,” a “fully ‘green’ technology” at “half the price per stored watt-hour”—will sound familiar to Hart and other battery enthusiasts. Yet EEStor’s credibility was given a boost earlier this year when it entered into an exclusive agreement with Lockheed Martin to use its technology for “military and homeland security applications.”

Personally, Hart isn’t waiting around for the GMs and Lockheed Martins of the world to solve the energy conundrum. He’s busy inventing his own solutions, making do with the batteries at hand. Hart is constructing an electric car based on the Selectra Sunrise prototypes of the 1990s, which he hopes to someday market as a kit for plug-in enthusiasts. “You look at the tools you have and make an engineering choice,” Hart explains. “Lead-acid batteries are heavy, but they’re cheap. I can make them last, and they are recyclable.”

But the main innovation in Hart’s car has nothing to do with how it’s powered—it’ll be compatible with any kind of battery—but rather with its strong and lightweight frame, influenced by the ultraefficient “hypercar” philosophy of environmentalist Amory Lovins. “If I make the car lighter, I still get the fuel economy I’m looking for,” notes Hart. In other words, for now, the best way to get more out of batteries is to simply demand less of them.