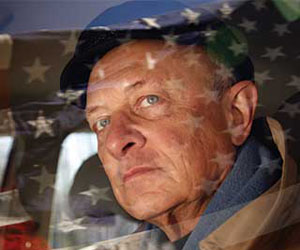 
James Woolsey, the former director of the Central Intelligence Agency, is making me a fresh cup of Trader Joe’s coffee. We are sitting around his kitchen island, two cats afoot, in the tasteful, solar-powered farmhouse where he lives with his wife near Annapolis, Maryland. Looking out the windows at the fields rolling to the West River, Woolsey excitedly describes his plans to plant camelina, a hardy Eurasian plant whose oil he hopes to convert to biofuel to supplement his geothermal heating system.

Tall and lanky and dressed in a navy sweater, an oxford shirt, jeans, and Top-Siders, the 66-year-old tells me the story of how he, a self-described “Scoop Jackson/Joe Lieberman Democrat” who served as Jimmy Carter’s undersecretary of the Navy and Bill Clinton’s cia director and was known for his support of Iraqi exile Ahmad Chalabi and the Iraq War, became an ardent advocate for energy independence.

Like many clean-energy enthusiasts, Woolsey is part geek, part zealot. He’s happy to spend a Saturday morning showing off the three rows of photovoltaic panels on his roof, the meter in his basement that displays when his house is feeding electricity back to the grid, and his white hybrid with a “Bin Laden Hates This Car” bumper sticker. “In two weeks,” he boasts of his next oil-saving upgrade, “my Prius is going to become a plug-in.” He wrote the foreword to 50 Simple Steps to Save the Earth From Global Warming, appeared in Who Killed the Electric Car? and Leonardo DiCaprio’s The 11th Hour, and cofounded a group to wean Americans from foreign oil.

As Woolsey explains it, there is a seamless connection between his strategic worldview and energy-independence convictions. In an op-ed he coauthored for National Review last September, he wrote of ending our reliance “on the whims of opec‘s despots, the substantial instabilities of the Middle East, and the indignity of paying for both sides in the War on Terror.” He still thinks the United States should continue its global military role even as it untangles itself from the Middle East, standing by the decision to depose Saddam Hussein. “I’d support his ouster again if there weren’t a drop of oil in Iraq,” he explains. “If all that had been at issue was the oil, the simple thing to do would have been to just buy it.”

Woolsey recalls the moment he started thinking seriously about energy as both an environmental and strategic issue. “I was sitting in my car in a gas line in Washington in ’73, after the Saudis had declared an oil embargo on us and Israel was attacked,” he says. “And I got mad.” Energy issues have captivated him ever since. In the early ’80s, he joined the Jefferson Group, an alternative-fuel salon founded on the Jeffersonian ideal “that the future of America is determined by the independent yeoman farmer.”

An independent streak has run throughout Woolsey’s 40-plus years in Washington. He has served in four administrations, both Republican and Democratic. In the twilight of the Cold War, he found himself increasingly identifying with Republicans on national security. He spent three years as a member of then-defense secretary Donald Rumsfeld’s Defense Policy Board. When I met with him, he was expecting another career change, leaving the federal contractor Booz Allen Hamilton to join a California firm that invests in alternative-energy technology. He’d also just appeared in an anti-oil print ad for the American Clean Skies Foundation, a PR group started by a natural gas company.

Being a green neoconservative is becoming less lonely, Woolsey says, especially as more hawks come to see energy as a security issue. He tells a story about an argument with a friend who is a global warming skeptic. When Woolsey explained how improvements to the electrical infrastructure could make it safer from terrorists, his friend replied, “Oh, well, that’s fine, then—we can do all that as long as it’s not because of this fictional global warming.” Former House leader Newt Gingrich recently came out in support of renewable energy, and the members of Woolsey’s Set America Free Coalition include such prominent hawks as Daniel Pipes, Frank Gaffney, and Cliff May. “It’s less that hawks are going green as that hawks and greens have some common interests,” May explains.

Woolsey concedes that he is disappointed in the Bush administration’s indifference toward renewable energy, but he notes that the president’s admission that “we’re addicted to oil” was “a sign that they’re starting to take the issue seriously.”

What does he think it will take to get Americans to really kick the oil habit? Woolsey’s looking to fellow Iraq War stalwart John McCain to do the job, citing the senator’s support for a carbon-cap-and-trade system (cosponsored by Lieberman). “McCain is like Teddy Roosevelt,” Woolsey says. “You know, Teddy Roosevelt was an environmentalist. He helped found the national park system.” And how long does he think a Republican-led energy revolution would take? He estimates about eight years.