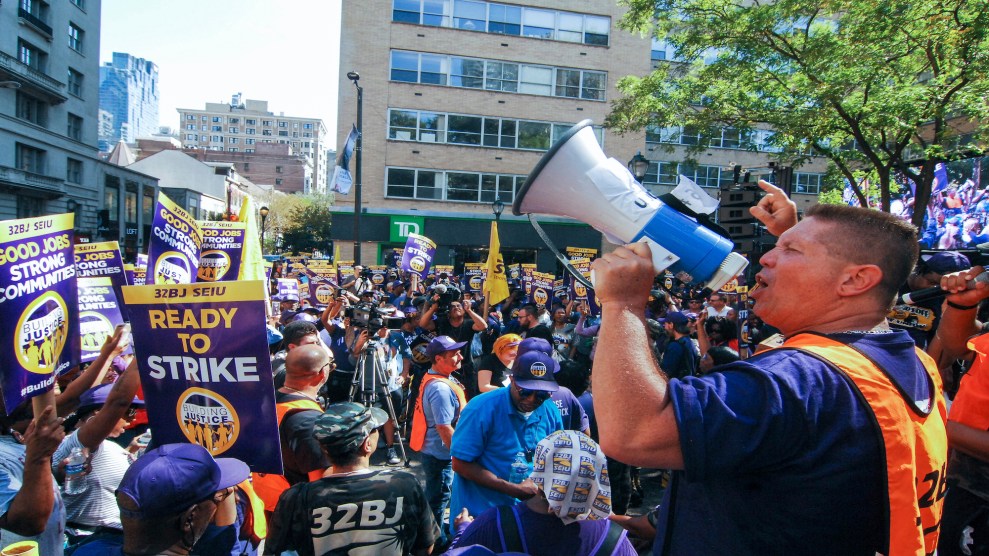 More than 700 San Francisco janitors represented by the Service Employees International Union (SEIU) walked off the job yesterday morning, kicking off a three-day strike for improved COVID protections and working conditions after months of contract negotiations broke down.

“These buildings will not be safe until janitors have a fair contract,” Olga Miranda, a striking janitor, told local CBS affiliate KPIX—and if janitors aren’t safe, said Miranda, others “definitely will not be.”

Since the pandemic began, SEIU Local 87 members say that over 3,000 janitors, largely immigrant women of color, have been laid off, and at least 26 workers have died of COVID-19. With their eight-month fight for a new contract at an impasse, union janitors are demanding not just better ventilation and protective gear, but a wage bump, health insurance coverage, improved sick pay, and protections against workplace sexual harassment.

When the pandemic hit last March, it laid bare the precarious conditions that low-wage service workers face—and unleashed a flurry of labor strikes that weaved COVID-related demands into a wider fight for improved working conditions. Across the West Coast, similarly vulnerable farmworkers have staged strikes—with and without union backing—not just over inadequate PPE and COVID cover-ups but over wage cuts and lack of sick pay during the pandemic. As my colleague Julia Lurie reported in December:

As some pickers and packers reached that breaking point, there have been blips of COVID-related organizing up and down the West Coast…hundreds of fruit packers in Washington’s Yakima Valley left production lines to protest a lack of safety precautions and hazard pay. In Santa Maria, California, strawberry pickers walked off the job to protest wages falling just as many families were particularly cash-strapped. Blueberry pickers near Fresno also struck over a wage cut, standing by the fields waving red-and-black [United Farm Workers] flags.

As in San Francisco, those strikes weren’t limited to masks and hand sanitizer. Workers who mobilized around immediate threats to their health and safety have broadened their demands to include working conditions exacerbated by the pandemic—notably in Bessemer, Alabama, where Amazon warehouse workers are casting their final votes in the most serious attempt yet to unionize the company. (Amazon CEO Jeff Bezos saw his net worth soar by $58 billion during the pandemic.)

That effort has won support from President Joe Biden and former Labor Secretary Robert Reich, among others. And according to Gallup, two-thirds of Americans approve of labor unions—their best polling in more than a decade.

In San Francisco, 26 janitors have died of #COVID19. We're a year into the pandemic – but janitors still don't have the PPE and ventilation they need.

So today, as SF moves to orange tier, @SEIU87 janitors began a ULP strike to demand safety on the job.#1u pic.twitter.com/3IqeDKgaXO

Janitors’ strikes across the city aren’t new. In 2018, SEIU 87 janitors struck outside the offices of the troubled co-working startup WeWork with a Mariachi band playing in support; in 2019, the union fought for a fairer contract on the steps of gym company Equinox, both times drawing attention to the disconnect between startups’ treatment of higher-level employees and their essential workers. Elsewhere, the union is fighting for more than 10,000 airport workers pushing for health care in New York and New Jersey, as well as migrant domestic workers fighting for permanent residency.

“I deserve to feel safe on the job,” Ramiro, another SEIU janitor, said at the strike. “But almost a year into the pandemic, and we’re still picking up trash without masks or hand sanitizer.”