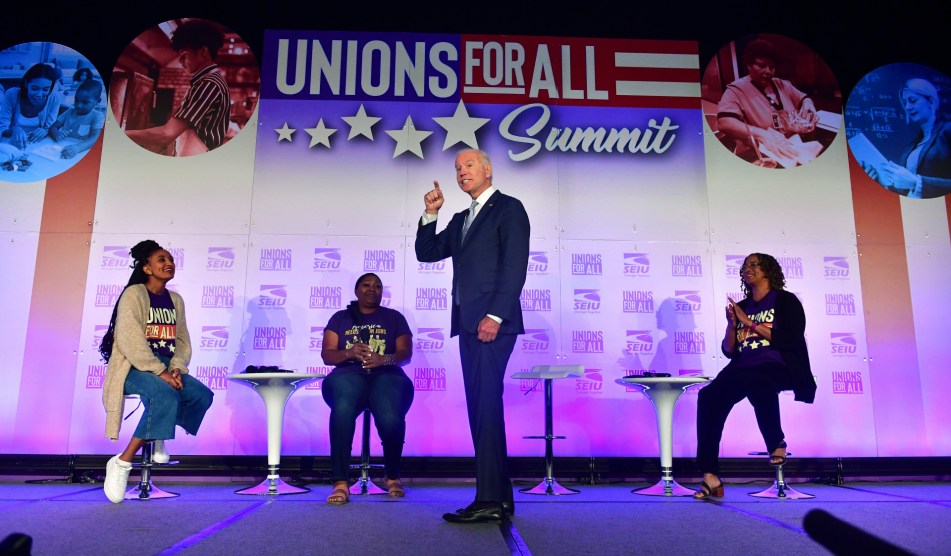 There were early signs President Joe Biden would try to make good on his pledge to be “the most pro-union president you’ve ever seen.” On the first day of his presidency he fired Peter Robb, the anti-labor general counsel of the National Labor Relations Board appointed by Donald Trump. One day later, Biden fired Robb’s Trump-era deputy.

The pro-union shift has now become far more public. On Sunday, Biden delivered a video message in support of unionization and against the tactics companies use to stop it. The video comes as thousands of Amazon workers in Bessemer, Alabama, are facing intense pressure from management as they vote on whether to unionize. Biden didn’t explicitly tell Bessemer workers to join the Retail, Wholesale and Department Store Union. But it was hard to see the video posted to his official Twitter account as anything less than an endorsement.

Workers in Alabama – and all across America – are voting on whether to organize a union in their workplace. It’s a vitally important choice – one that should be made without intimidation or threats by employers.

Every worker should have a free and fair choice to join a union. pic.twitter.com/2lzbyyii1g

Labor historians quickly weighed in to say it was the most pro-union message they’d ever seen from a sitting president. I spoke with Nelson Lichtenstein, a history professor at the University of California-Santa Barbara, to understand the significance of Biden’s message. Lichtenstein, the author of 16 books including a biography of labor leader Walter Reuther and State of the Union: A Century of American Labor, also directs the university’s Center for the Study of Work, Labor, and Democracy.

The conversation below has been edited for length and clarity.

Have you seen a president deliver a message that was as pro-union as the one Biden delivered on Sunday?

I haven’t. It hasn’t happened in my lifetime. Roosevelt is usually quoted as [saying], “If I worked at a factory, I would join a union.” Something to that effect. But that was said in a more abstract sense. The unions ran with it. They put it on posters. But it was never as specific as what Biden said.

Biden did a number of remarkable things in this statement. Clearly, it’s pro-union. More than that, it denounces employer intimidation, anti-union propaganda, etc. Everything he was denouncing is perfectly legal. Big companies hire smart law firms and they figure out exactly what they can do right up to the edge of the law.

Yes, I’ve read that Amazon has retained Russell Brown, which specializes in “maintaining a union free workplace,” as a consultant to help stop the union drive at a cost of more than $3,000 per day.

The remarkable thing is it’s not as if Biden was attacking lawlessness. He was attacking the way in which the law has evolved. He was saying that this is wrong.

Often in the course of a presidency—like Clinton or Obama—a strike takes place. A president will say, “We want fair dealing. We want a level playing field. We hope you’ll compromise.” When it comes to union organizing campaigns, presidents really want to stay out of that because, frankly, a lot of them fail.

What Biden has done is extraordinary as rhetoric alone, even if it’s not followed up with vigorous legislative action.

How did what Biden said on Sunday compare to what you might have expected to hear from Obama?

When Scott Walker was really running roughshod in Wisconsin over the unions and there was a recall election, people wanted him to go to Wisconsin. He didn’t.

When Biden puts down a marker like this, it’s not just important for unionists. It’s also saying if you’re some waffling Democrat, here’s the policy of the government on this. It’s better than some legal statement that that no one will pay attention to.

Biden also directly connected unionization to protecting the rights of Black and brown workers. Have you seen Democratic presidents making that connection as strongly as Biden did?

To some extent. Our image of the working class remains—contrary to all reality—some white male, blue collar, industrial worker. It’s just not true. The working class is grocery clerks and McDonald’s workers who are more likely than not to be women and people of color. What it will take to transform the image of what the working class is to this multi-racial, predominantly female, service sector, I don’t know.

What would the Biden administration need to do to protect people in Bessemer and send a signal it will protect other workers? What is the significance of having someone like Jay Carney, President Obama’s former press secretary, as Amazon’s senior vice president for policy and press?

It shoots a cannon across the bow of companies. So, for example, Carney. He worked for the Obama-Biden administration. What’s the next thing he’s gonna say?

In a way, they stuck their chin out. I see these ads for Uber and many companies about, “We’re for diversity. We’re for Black Lives Matter.” When Biden links that to unionism, it pushes back on them. Maybe Biden is beginning the hard work of creating a sense of shame on these companies who transgress the rights of workers as workers.

In some ways, that’s even more important than getting a law changed. Making it so that companies think twice about their anti-union strategy because maybe it’ll cost them some money or maybe it’ll be bad PR.

At the nation level, what concrete actions are you hoping to see the Biden administration take?

He’ll put some very good people in the NLRB (National Labor Relations Board). And that’s important. But the NLRB can be appealed to the courts. The NLRB can push the marker a little bit, but the courts are still there. So, that’s a difficult thing. And also time, it takes a long time.

Then, there’s the PRO Act, which makes illegal a lot of things that some of the companies do right now as a matter of course like captive audience meetings.

As things stand and as they have stood going back to the 60s, pro-union legislation has failed repeatedly in Congress. The use of the filibuster first began on racial questions and that goes way back. But the second big thing was union questions. The filibuster would stop the PRO Act from going through, but it’s important to put it out there and say, this is what we want. I think what Biden is doing is making pro-union issues more central to the Democratic agenda than before.

Bringing this back to Bessemer, how important is it for workers who may be deciding on how to vote to see the President of the United States weighing in on the side of unionization?

I’m sure that many of them say, wow, that’s pretty good. It will give them encouragement, make them a little less worried. On the other hand, when they go into the warehouse, who is their supervisor? It’s some figure who they know is against them being for the union.  So, you have the president in Washington making the statement and that’s important. But then every day they go in there and they find that there’s the supervisor. There’s the whole apparatus of the company.