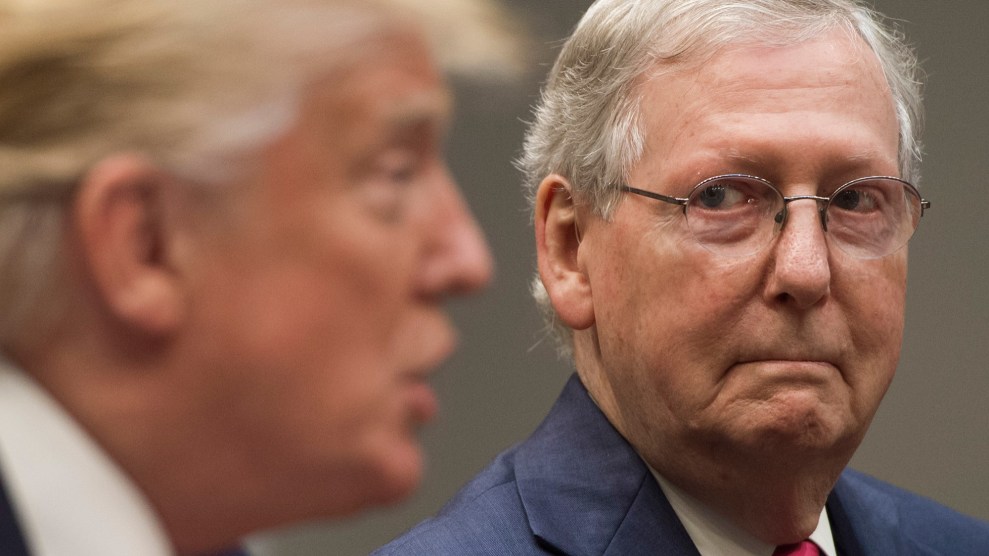 After losing the White House and both chambers of Congress during former President Donald Trump’s single-term—and as his second impeachment trial looms over the Senate—the Republican Party is contemplating its future. Given all the above, it’s safe to describe this as, supposedly, a pivotal moment. Should the GOP continue to embrace white grievance and a cult of personality as its organizing ideology? Or should it try to pivot and become a political party with a policy platform and a commitment to governing beyond tax cuts for the wealthy and judges for the far right?  Some have framed the internal debate as a civil war. “Trump stokes a civil war out the door,” Vanity Fair posited in early January. “Trump impeachment ignites a GOP civil war,” The Hill argued earlier this month. But that suggests a genuine reckoning is going on, and what this ignores is that all the most meaningful battles have already been fought and decided.

On its face, Trump’s loss coupled with his months-long lie that sought to overturn the election results that culminated in a deadly insurrection at the Capitol seems like perfect catalysts for some soul-searching. But one only need to look back to its very recent history to see what happens when a Republican party in crisis indulges in a little public self-examination (or is it more like dirty laundry airing?). Who are they trying to fool? The GOP has already decided who it wants to be.

One need only go back to 2012, when the party also found itself at a crossroads. Sen. Mitt Romney (R-Utah), had just lost to Barack Obama. The party had only won the popular vote once in the previous six presidential elections. Record turnout in 2008 had propelled the first Black person to the White House, and Democratic majorities had taken over in both the House and the Senate. Cue for a time of introspection, and sure enough, a few months after Romney’s defeat, the Republican National Committee released its 100-page autopsy report. Among the conclusions was the importance of reaching out to women, nonwhite, and young voters, as well as expanding absentee voting among their base. And, jettisoning the need to impose some version of ideological purity on party members.

“If there’s one message I want everyone to take away from here, it’s this: we know that we have problems. We’ve identified them, and we’re implementing solutions to fix them.”

The report also emphasized the need for the party to recalibrate its views on immigration and gay rights. “If there’s one message I want everyone to take away from here, it’s this: we know that we have problems,” Reince Preibus, the then-RNC chair said after its release. “We’ve identified them, and we’re implementing solutions to fix them.”

Just one presidential election cycle later, Donald Trump descended an escalator, declared his candidacy, and promptly referred to Mexican immigrants as rapists and criminals. Still under the illusion that the autopsy’s suggestions were the way forward, the GOP establishment initially reacted with horror. “To make these extraordinarily ugly kind of comments is not reflective of the Republican Party,” Jeb! Bush, the former governor of Florida whose wife is Mexican, said about Trump’s comments at the time. “He’s doing this to inflame and incite and to draw attention, which seems to be the organizing principle of his campaign.”

He certainly got that right. Trump’s entire campaign and presidency were a master class in demonizing the other and dispensing with the niceties of some of his fellow Republican predecessors’ rhetorical dodges. The so-called “serious” Republicans sought to denounce their own standard-bearer, while the rest either were forced to go along with Trump out of fear of a mean tweet, or because they actually agreed with him. His one, seemingly endless term was defined by its naked racism: referring to African countries and Haiti as “shitholes;” telling four elected officials of color to “go back” to where they came from; saying that there were “very fine people” on both sides after white supremacists rallied in Charlottesville, Virginia, and killed a counter-protester; and threatening Black Lives Matter protesters with violence—just for a few highlights.

One of the striking insights from the 2013 report was the acknowledgement that expanding voting access with mail-in and early voting helped Obama win. Investing in Get Out the Vote efforts among their own base, they said, could help Republicans win more elections.  Once again, Trump threw that insight out the window, updating it with his own observation that mail-in voting would hurt Republicans because it would allow more Democrats to vote.

The ability to vote by mail has always been widespread but became even more critical during the pandemic. But, instead of encouraging his own supporters to cast a vote for him in the easiest and safest way possible, Trump castigated absentee voting as a nefarious way for Democrats to “rig” the election against him. Probably sensing that he would lose, Trump spent the months leading up to the 2020 presidential election smearing mail-in voting. In the end, all of his fear-mongering may have depressed turnout among Republicans, helping Biden and Georgia Democratic Senate hopeful secure wins. Now, rather than follow the wisdom from the 2013 autopsy report and expand absentee voting among its base, all over the country Republican legislatures are working on ways to make voting harder. Meanwhile, as we all know, Trump lost the election but embarked on a bid to overturn the will of voters. He was enabled by nearly every Republican in Congress.

Perhaps the starkest contrast between what the GOP said it wanted to be in 2013 and what was utterly destroyed when Trump took over is the need for tolerance for disagreement within the party. The report refers disparagingly to purity tests, the idea that the Republican Party must never have any ideological disagreements. Au contraire, the report writers say. “[T]he Party is at its best as the Party of ideas, and healthy debate of those ideas is fundamentally good for the Republican Party,” the document reads.

In the report, former governors New Jersey’s Chris Christie and Ohio’s John Kasich are considered role models to emulate. Consider where they are now. After attaching himself to Trump’s side, being utterly ignored during Trump’s transition, and then reemerging for the election campaign, Christie contracted the coronavirus after helping Trump prep for his debate. Last we heard from the former governor, he was trying to salvage his reputation as a Serious Republican by condemning Trump for his role in inciting the Capitol attack. For Kasich’s part, he aligned with Biden to illustrate that the two parties can work together; it’s a road he walks alone. Once heroes among the right, both men are irrelevant today.

“[T]he Party is at its best as the Party of ideas, and healthy debate of those ideas is fundamentally good for the Republican Party.”

Even after a Trump-fueled mob attacked the Capitol on the day Congress was set to certify the vote for Joe Biden, most Republicans pledged their fealty to the then-president. The Democrats ultimately impeached Trump for his role in the attack. But when Rep. Liz Cheney (R-Wyo.) crossed the aisle and voted to impeach, Republicans moved quickly to strip her of her leadership position. The Arizona GOP, infamous for its inflammatory Twitter account, voted to censure Arizona Republicans like Gov. Doug Ducey and two private citizens, Cindy McCain, the wife of the late Sen. John McCain and former Sen. Jeff Flake, for not showing sufficient loyalty to Trump. Perhaps in a bid to outdo the Arizona GOP, the Oregon state party released a resolution calling the Capitol insurrection a “false flag” designed to make Trump look bad. That is, of course, a lie. It is also far from an institution dedicated to being “a Party of ideas, and healthy debate of those ideas.”

Now could be the perfect time for a Trump rebuke. The former president left office historically unpopular, impeached twice, and had Twitter, his main tool for bullying Republicans into submission, taken away from him. Convicting Trump in the Senate would hold the former president accountable for the violence and destruction he encouraged throughout his tenure but especially during his final days in office. But the Senate is already signaling that they won’t have enough Republican votes to secure a conviction when the trial begins early next month. They’re not refusing to hold Trump accountable because they fear some grand reprisal (except maybe from their own voters), it’s because they cannot permit themselves to imagine that  a months-long attempt to steal an election that culminates in an attack at the Capitol is a punishable offense. At least not when the GOP does it.

Despite their losses in the 2020 elections, the Republican Party has no real incentive to reverse course. Trump won majorities among white voters, white Protestants, men, and Southern voters. Instead of coming up with policy ideas to address a pandemic, an economic crisis, and health care, the GOP has opted to combine voter suppression and appealing to racial animus to concoct a winning formula. In the aftermath of the Capitol siege, most of the party is choosing to stick with Trumpism and owning the libs as ideology.

Consider the case of Rep. Marjorie Taylor Green (R-Ga.). Over the last few days, several news stories have broken about her social media posts from 2018 and 2019 that reveal she supported executing Democratic politicians. Video also surfaced of her harassing victims of the 2018 Marjory Stoneman Douglas High School shooting. So far, all this has earned her the mildest of rebukes from House GOP Minority Leader Kevin McCarthy.

And for those who don’t want to stick with Trumpism? Well, they will either be punished or forced to step aside, like Sen. Rob Portman (R-Ohio) who said Trump bears responsibility for the insurrection and then announced that he’s not running for re-election next year. (He also hasn’t weighed in and pledged to vote to impeach.) During the House impeachment vote, several Republican members said they wanted to vote yes—but were afraid that their constituents would harm them or their families as a result.

All the handwringing about impeachment and where the party goes without Trump is merely bluster. Since the 2013 autopsy, the Republican party has only gotten more popular among its mostly white base as it’s doubled down on the conditions that made Trump president in the first place. For the GOP, this moment isn’t a civil war at all, it’s an unconditional surrender. The Republican Party will simply purge the traitors and re-emerge, once again, further committing to white grievance as ideology. After all, it worked so well in the past.